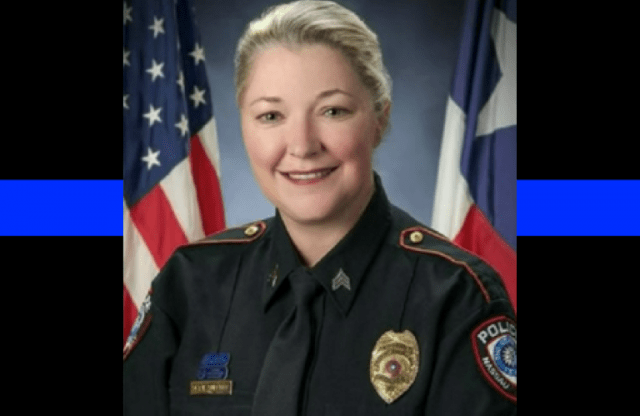 NASSAU BAY, Texas — A Texas police sergeant was killed when a man wanted on a domestic violence warrant fled from a traffic stop and struck her with his vehicle, police said.

The search continued early Wednesday for the man, who police said likely still has one handcuff attached to his wrist. Police have not released his name.

Nassau Bay police Sgt. Kaila Sullivan was assisting in a traffic stop Tuesday night at an apartment complex when police discovered the driver had an outstanding warrant for assault on a family member, Nassau Bay Police Chief Tim Cromie said.

The driver escaped the officers then drove off in his vehicle, striking Sullivan, who later died at a hospital, Cromie said. The vehicle was discovered abandoned as the suspect eluded capture, click2houston.com reported.

Sullivan, 43, was approaching her 16-year anniversary with the Nassau Bay Police Department and had worked on the night shift, Cromie said, calling her “a consummate professional in police work.”

@HCSOTexas teammates and I are still at the scene. Each member wears their mourning band over their badge honoring Sgt. Brewster, killed in the line of duty just days ago. Now our grieve and condolences extend to Sgt. Sullivan’s family, the Nassau Bay PD & Community. #HouNews pic.twitter.com/hn6fMlHrx3

The Harris County Sheriff’s Office is leading the search for the suspect. Sheriff Ed Gonzalez said Sullivan’s death was “another grim reminder” of how dangerous police work can be, noting that the community is still mourning the Saturday death of a Houston police sergeant and the September shooting death of a Harris County deputy.

At the time of this report deputies in southeast Houston are engaged in a standoff at the home of the suspect’s mother. Law enforcement authorities believe the wanted man is inside the home, refusing to surrender. SWAT has the home surrounded and investigators are working on a search warrant for the residence.

UPDATE: The suspect has been captured. Read more.