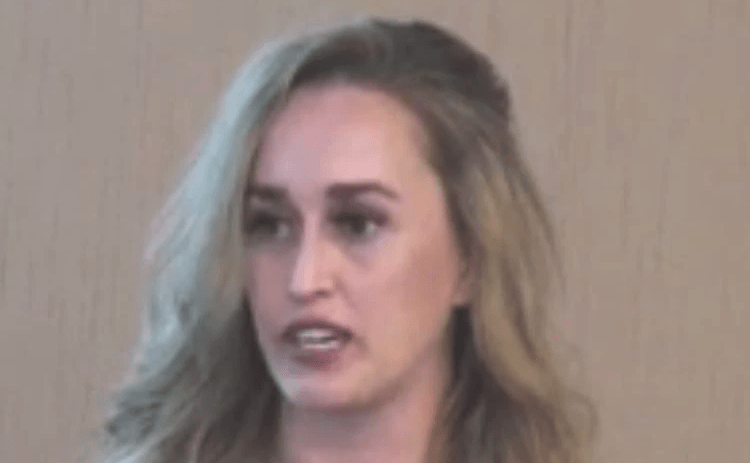 Richardson police Officer Kayla Walker accused her department of running an illegal ticket quota system in April 2021. She did this at a city council meeting.(Screenshot of Richardson council meeting)

RICHARDSON, Texas — Officer Kayla Walker of the Richardson Police Department recently stood before the city council and accused her bosses of violating state law by enforcing a traffic ticket quota, according to a local report. She was described as a “brave policewoman” by a reporter for The Dallas Morning News.

Ticket quotas are illegal in Texas. Walker says the department has done this for decades. She told the council she was speaking on behalf of current and former officers. She later said that’s about 30 people, according to the report.

In her words: “The Richardson Police Department has been illegally using quotas to evaluate and discipline officers. Patrol officers are threatened with punishments for not writing enough tickets, arresting enough people and making enough citizen contacts.”

How does it work? The 13-year veteran said: “The command staff does this under the guise of monthly productivity reports to compare officers to one another.”

Under state law, it’s illegal for police command staffs to use quotas to evaluate, promote, compensate or discipline. But Walker says that’s happening in Richardson.

Walker asked for an investigation to validate her claims. Much to her surprise, she learned later from a watchdog group that city leaders have granted her wish.

At a follow-up council meeting, City Manager Dan Johnson said: “I want to assure you [Mayor Paul Voelker], the city council, the public, Officer Walker and the Richardson Police Department that the concerns raised regarding traffic enforcement practices and alleged violations of the state transportation code are serious matters.

“It compelled my office, in coordination with the city attorney and the police chief, to initiate a thorough review. This review will involve outside legal counsel, and it will be conducted in an orderly and expeditious way.”

He promised to share results with the public and added that he assures everyone this is “getting our full attention.”

The mayor, city manager and police Chief Jimmy Spivey declined to talk to a watchdog group.

However, city spokesman Greg Sowell told a reporter for The Dallas Morning News: “We do not respond to interview requests on active investigations. … Time needs to be given for the outside investigators to do their work, and we ask patience and understanding.”

Richardson police spokesman Kevin Perlich declined a request from the journalist to pass a note to Walker for an interview because, he explained, her allegations were made “outside of the department.”

“She’s obviously not following the chain of command on this,” he said.