Sudden icy road conditions have been blamed for the massive collision 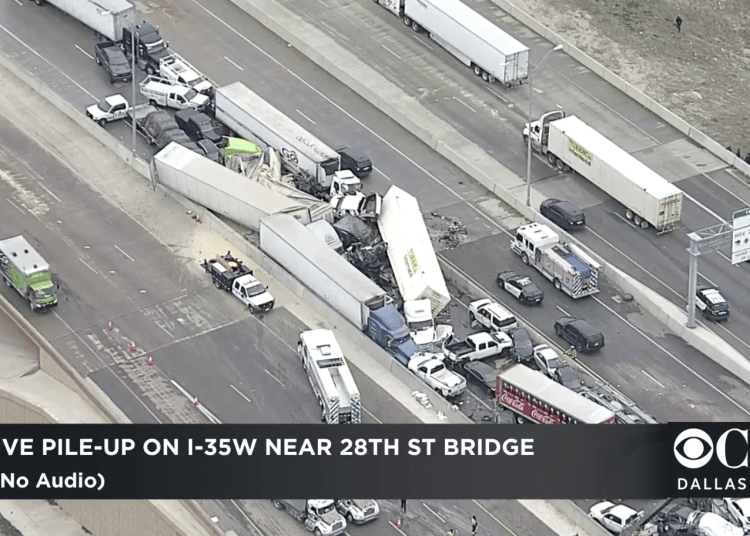 FORT WORTH, Texas — A multi-car pileup, involving more than 100 vehicles, along Interstate-35W in Fort Worth has shutdown the highway and left several people trapped in their cars. Fort Worth police spokesperson Officer Daniel Segura has confirmed at least 5 people, who have not been publicly identified, were killed in the crash, CBSDFW reported.

Sudden icy road conditions have been blamed for the massive collision, first reported about 6:30 a.m. on Thursday.

Initial assessments estimated 70-100 vehicles — including both passenger automobiles and 18-wheelers — involved police said, but the number could end up being much higher, as first responders continued to assess the scene.

Multiple videos posted on Twitter showed how quickly the icy roads turned a traffic jam into a disaster.

The same conditions that led to the incident have also made it difficult for local agencies to conduct rescue operations. At least 36 people have been transported to the hospital for medical attention in various conditions, Bradley Perez, Fort Worth Police public information officer, told Fox News.

The Fort Worth Police Department and local service Med Star are on the scene, as well, and assisting with the search and rescue.

Y'all, this pileup in Fort Worth. 😬

Due to the icy conditions, the agencies are bringing in sand trucks to help improve law enforcement and the fire department’s ability to reach and assist people in need.

“This is obviously not something we deal with a lot in Fort Worth,” Drivdahl said, referring to the ice and snow. “But we do have the resources to respond to it.”

Officials asked that residents remain home due to extreme conditions. Between that and the accident, the roads are “very dangerous,” they said.