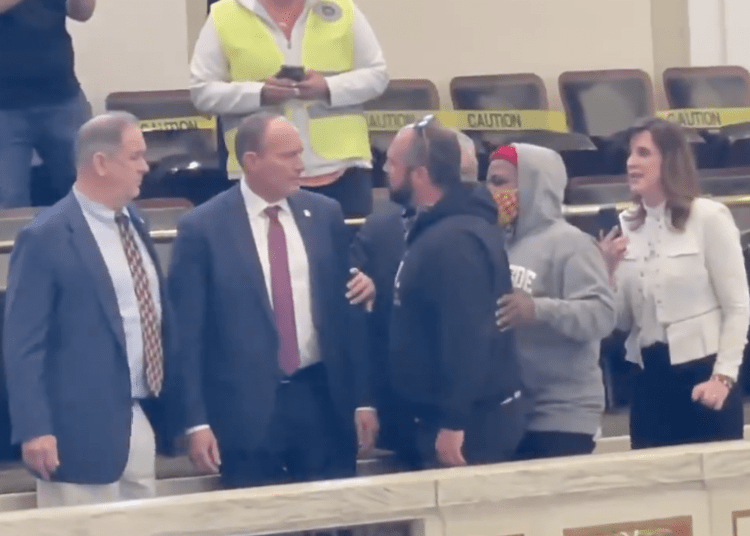 OKLAHOMA CITY — Oklahoma Gov. Kevin Stitt (R) approved two bills that crack down on protests Wednesday, just as demonstrators angry about the legislation barged into the state capitol, prompting the House and Senate chambers to lock their doors.

The group was protesting, in part, one bill that increases the penalties for blocking roadways and grants immunity to motorists who kill or injure protesters on the road. Another bill seeks to limit doxxing of police officers. Both bills made their way through the House and Senate’s Republican majority before reaching Stitt’s desk, Fox News reported.

Some protesters became argumentative with lawmakers. “You are a f***ing disgrace to the whole country!” one shouted towards the legislators. The group then tried to get into the Senate chamber, which had locked its doors, according to reports.

Protestors are chanting and have interrupted House session

This was inside a few moments ago pic.twitter.com/m3EENI1bxW

The group has now left. The house goes back to a vote. pic.twitter.com/NA4HWZn1z3

The bill would make blocking use of a public street a misdemeanor publishable by up to a year in jail or a $5,000 fine. The measure would also grant a motorist criminal and civil immunity if they kill or injure someone while fleeing from a riot, Fox reported.

Sen. Rob Standridge, a Republican who wrote the bill, said he was called to action by an incident in Tulsa last summer where a pickup truck drove through a crowd protesting George Floyd’s death on the Tulsa interstate. Some of those protesting were forced to the edge of the overpass. Several were injured and one was paralyzed from the waist down. The driver, whose family was in the car, was not charged.

“The kids cowered in the back seat because they feared for their lives,” Standridge said. “That’s what this bill is about.”

According to Fox, Gov. Stitt signed the bills.