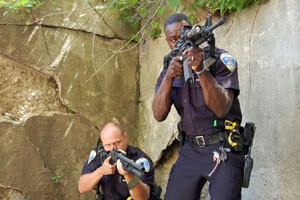 As a profession, we have a duty and responsibility to learn from the sacrifices of others.  Too many officers have lost their lives in the pursuit of justice due to the tactics they employ and, in some cases, the tactics they fail to employ.  It is time we say, “Enough!”  It is time we have courageous leaders step forward and admit what we are currently doing is not working.

John 15:13 says, “No one has greater love than to give up one’s life for one’s friends (CEB).”  Even as honorable as that is, it is not to say we are bound to lay down our lives needlessly.

There are several things we could be doing differently.  There are things that are more effective, more efficient, and far safer than what we are currently doing.  There are people and programs which are dedicated to ensuring officers have the best possible chance of returning home to their loved ones the way they left them.  Society is evolving, which means its’ criminal are evolving.  Yet more and more our officers and their training are failing to evolve as well.

Thanks to the launch by Law Officer Magazine in 2010, we have initiatives such as Below 100, which at their core bolster great goals for law enforcement nationwide. However, these types of initiatives require that an agency’s administration and its’ leaders come to terms with the fact that the training component within said agency has to be dynamic and realistic. It must also be reflective of current trends, deficiencies, and dangers that present themselves to its officers.  Further, it also requires that the officers invest in themselves and their training.

Each officer must train as if their life depends on it; because quite frankly, it does.

Without a sincere spirit of conviction and a spirit of staunch intentionality our training becomes no more than simply something to do; the checking of boxes.  Training that fails to push its participants to the brink physically, mentally, and emotionally lacks the critical components of survival that officers sorely need in today’s times.

So what can we do about it?

We can start by being leaders.  Leaders aren’t just chiefs, sheriffs, or those that are second in command.  Leaders are those within an organization who possess varying levels and abilities to influence others.  Once we have identified the leaders we need those same leaders to become courageous.  One way of being a courageous leader is to and acknowledge whether the officers’ training properly equips them with the tools they need to effectively do their jobs and to also admit whether the officers’ training gives each officer the best chance of survival; each and every shift.  If the honest answer to either of these questions is a “no,” or even so much as a hesitation, as leaders and trainers we owe it to take a look forward and repair those deficiencies and do what is necessary to equip officers with these critical tools without haste.

Programs such as Strategies and Tactics of Patrol Stops (STOPS) have long been designed with officers in mind.  Through this rigorous no nonsense training, officers work repetitiously to earn their rightful place as tacticians.  This training provides officers with critical and focused teachings in the areas of officer survival and counter ambush tactics, making them hard to kill!  Let’s not wait until these dreaded incidents hit close to home before we act.  We owe it to our people to get out in front of these trends.

If your agency is ready to take the courageous step of equipping your officers with the training and tactics they need to survive the streets visit www.SurvivalTrainingSolutions.com today for more information and contact [email protected] to speak with someone about bringing this training to you and your agency.  It’s time we take back and rightfully restore our profession!