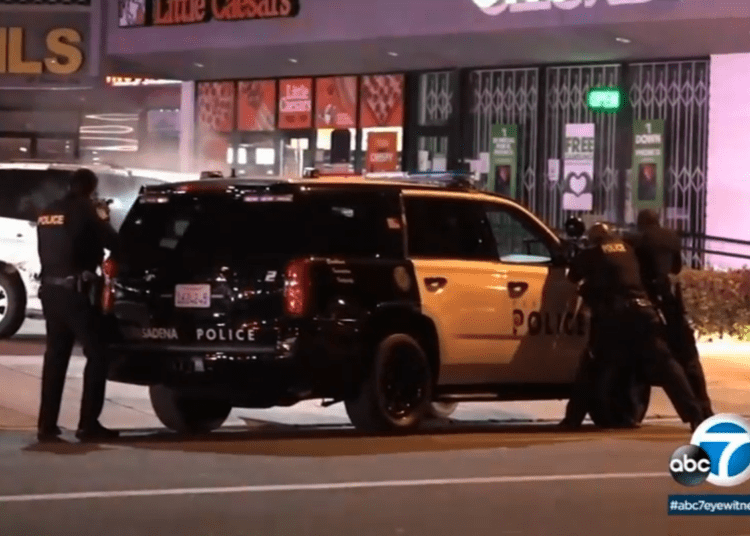 PASADENA, Calif. – Law enforcement officers fatally shot a suspect who drove toward police following a vehicle pursuit that ended early Saturday morning in a Pasadena parking lot, according to officials.

The chase terminated shortly before 2:30 a.m. at a strip mall near the intersection of Orange Grove Boulevard and Lake Avenue, which resulted in a standoff, KABC reported.

“There’s a ton of cops, a white van,” said witness D.A. Ross, who was at a 7-Eleven store when the vehicles pulled into the parking lot. “Look over to the white van and we see this guy — he’s got a freakin’ handgun in his hand and it looks like he’s pointing it at his head.”

A woman who witnessed the shooting heard officers ordering the suspect to drop the weapon and saw him making the sign of the cross.

News video from the showdown reveals multiple officers opening fire on the minivan as it slowly moves toward their position.

Once the barrage of gunfire ceased, officers approached the minivan, which had two side windows shattered and evidence of bullet holes in the windshield.

The suspect was pronounced dead at the scene. His identity was not immediately released.

KTLA referred to the man as a “carjacking suspect.” A woman who identified herself as the suspect’s mother told the news outlet that her son was struggling with substance addiction and his mental health. She said he sent her a cryptic text Friday night that read: “It’s over. I love you. Watch the news.”

Investigators said the chase and subsequent gunfire was possibly related to an earlier vehicle pursuit in Rosemead that resulted in a crash involving a Los Angeles County sheriff’s patrol vehicle, KABC reported.

LASD said one of their deputy’s was involved in a crash with an innocent motorist’s vehicle. The deputy was injured and transported to a hospital in stable condition. No other parties were injured.

News video from the collision scene showed the front end of the patrol unit severely damaged.