'Our officers had a tough time taking the collision measurements at the bottom of the pool,' police joked 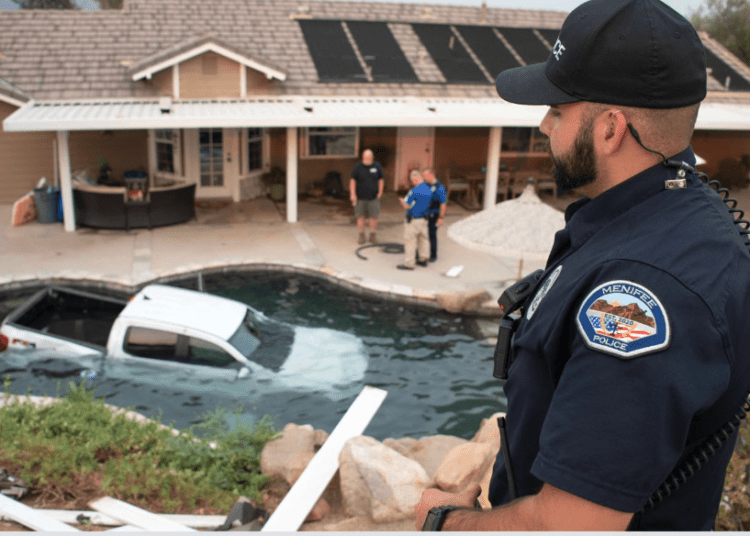 The driver lost control and this truck wound up in a backyard swimming pool. (Menifee Police Department)

MENIFEE, Calif. — It’s been unseasonably hot recently in California, even by their standards, so when a driver and a pickup truck landed in a backyard swimming pool, officers were quick to find humor in the situation.

The crazy crash took place in the city of Menifee, which is in the Inland Empire of Southern California. The driver somehow lost control of the vehicle and it wound up in the pool.

The Menifee Police Department shared photos on social media of a white pickup truck in the highly unusual location for an automobile almost completely submerged in water, WHIO-TV reported.

In the caption to the photo, police said, “We know it’s been so hot for too long, but if you need to cool off or your truck overheats, we don’t recommend driving into a pool!” The post included the hashtags “creative cooling” and “trucks don’t float.”

The driver was uninjured and managed to get out of the water. The driver’s name was not released.

Any officer who has ever had to obtain the area of impact (AOI) or point of rest (POR) at the scene of a collision can appreciate the humor when police joked, “Our officers had a tough time taking the collision measurements at the bottom of the pool!”

“Remember to stay hydrated in the heat,” they said in conclusion.