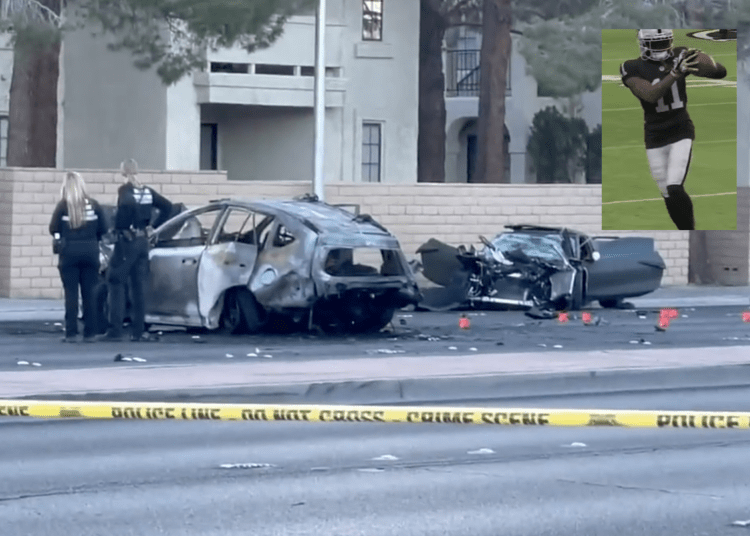 Las Vegas Raiders wide receiver Henry Ruggs III will be charged with DUI resulting in death, according to police. (Twitter/YouTube)

LAS VEGAS — A rising star wide receiver of the Las Vegas Raiders will reportedly be charged following a DUI traffic fatality, according to reports.

Henry Ruggs III, the second year player out of the University of Alabama, will be charged with a DUI resulting in death after being involved in a fiery car crash in Las Vegas early Tuesday, according to law enforcement, TMZ reported.

The Las Vegas Metropolitan Police Department released a statement confirming that Ruggs, 22, was driving the Chevrolet Corvette that was involved in a crash, which occurred about 3:40 a.m. near the intersection of South Rainbow Boulevard and South Spring Valley Parkway.

Upon their arrival, responding officers discovered a Toyota Rav4 that was fully engulfed in flames. Once the flames were extinguished by fire personnel, a deceased victim was found inside the vehicle. A preliminary investigation revealed that Ruggs’ Corvette rear-ended the victim’s vehicle, Fox News reported.

Rainbow is still closed in both directions while fatal investigators get a better look with daylight. Waiting for @LVMPD to release info on injuries or fatalities. @8NewsNow https://t.co/cS6w8Rrvb5 pic.twitter.com/SsO85v66VM

Ruggs remained at the scene where officers noticed that he “showed signs of impairment.”

The wide receiver was transported to a local hospital where he was treated for undisclosed “non-life-threatening” injuries.

Ultimately, Ruggs will be charged with a DUI resulting in death, according to police sources.

An attorney representing the former Alabama standout told TMZ Sports, “On behalf of our client Henry Ruggs III we are conducting our own investigation as of this writing and ask everyone to reserve judgment until all the facts are gathered.”

The Raiders released a statement confirming the team was “aware ” of the circumstances.

“We are devasted by the loss of life and our thoughts and prayers go out to the victim’s family,” the team said, via ESPN and the NFL Network. “We are in the process of gathering information and will have no further comment at this time.”

According to Ruggs’ profile on the Raiders website, the young standout has 24 catches for 469 yards and two touchdowns through the first seven games of the season. He was the 12th overall pick in the 2020 NFL draft.