They will no longer send officers to non-violent calls 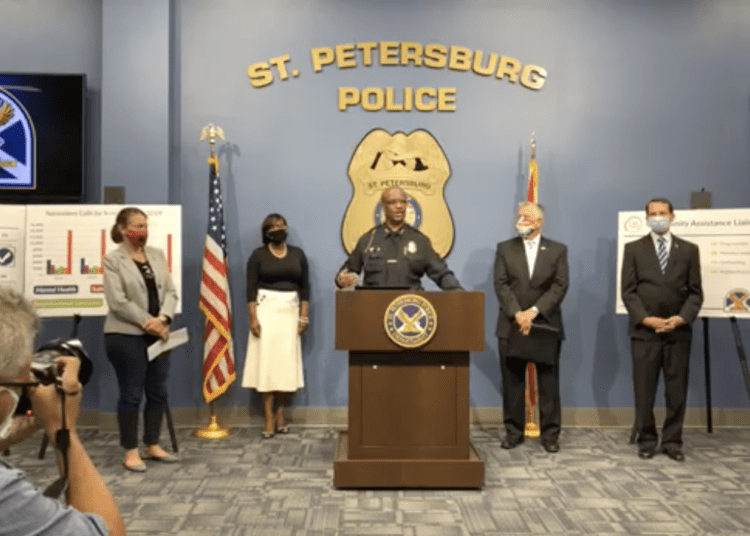 ST. PETERSBURG, Fla. — The St. Petersburg Police Department will no longer respond to non-violent 911 calls, such as quality-of-life complaints or mental health concerns, amid nationwide calls for budget cuts and policing changes, the agency announced.

The police department will instead send employees from its newly created Community Assistance Liaison (CAL) Division, which officials described as “a social service agency.” They will respond to 911 calls pertaining to a number of issues, including drug overdoses, disorderly intoxications, suicide crises and panhandling, the department said in a Thursday press release, which is included below:

The City of St. Petersburg Police Department will create a new division within the police department called the Community Assistance Liaison, to expand our approach to public safety by retaining a social service agency to respond to non-violent calls for service from the public. Beginning October 1, instead of sending a police officer, a CAL team member will respond to the following issues:

This new division will take over these calls rather than moving forward with a previous commitment to add 25 new officers over the next two years. The Police Department will lose $3,125,000 in federal grant funding awarded to pay for the new officers and $3,800,000 the City had earmarked in matching funds required by the grant. The City will instead use those funds to pay for this new service.

A police officer will always be dispatched to violent or life-threatening situations.

Here are the additional points the Chief made:

At the outset of the press conference, the mayor referred to the new employees as “community and social service professionals.”

Holloway said the police department spoke with faith and community groups, protesters and union officials, in the wake of George Floyd’s death.

“After all those conversations, we had one common goal. That common goal is very simple: Our citizen is asking for change. The City of St. Petersburg and the police department is ready for that change.”

On Thursday, Holloway also said the department is examining its use of force policy and how complaints are handled. It’s monitoring calls to determine whether or not to respond at all, Fox News reported.

“Believe it or not, we still get some calls about, ‘there’s an African American male sitting in the park, he doesn’t look like us,’” the police chief said during the press conference. “We’re not coming to those calls. If that person, he or she, is not committing a crime, we’re not going to that.”

He detailed additional training for the department, doubling de-escalation and self-defense training from one to two times per year.

Furthermore, a civilian member from a local advocacy or faith group will be added to the police department’s hiring board, according to the agency.

Experts at Law Officer quickly noted that many of the “non-violent” calls being re-directed to St. Pete’s CAL team members can become violent in a moments notice. Sending unarmed social workers to calls for service involving disorderly subjects, disputes, intoxicated individuals, drug overdoses, and mental health issues would appear to be a recipe for disaster.