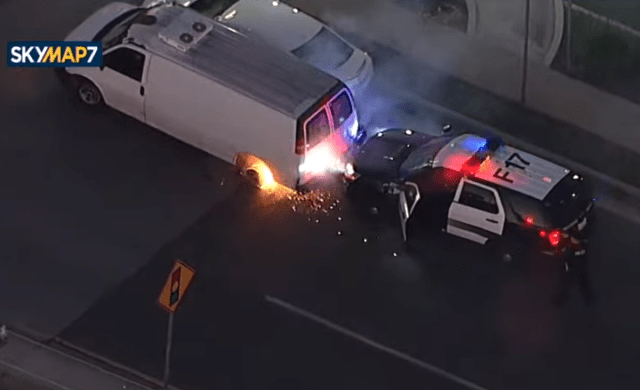 LOS ANGELES – A suspect is in custody following a vehicle pursuit across Orange and Los Angeles Counties on Wednesday evening that is difficult to put into words. The chase began about 4:45 p.m. in Fullerton and ended about 80 minutes later in Hacienda Heights.

Finally, at the termination point, Los Angeles Sheriff’s deputies opened fire on the suspect while he was still in the stolen truck at a gas station in Hacienda Heights, the Los Angeles Times reported. It wasn’t immediately clear if the suspect was struck before deputies made a tactical approach on the disabled vehicle and took the dangerous felon into custody.

“This was obviously an incredibly dangerous pursuit involving a suspect who had zero regard for public safety, for the motorists on the street and the police officers involved,” said Jon Radus, a Fullerton Police Department spokesperson.

The suspect was later identified as Johnny Anchondo, 32, of Moreno Valley, Yahoo News reported. He committed dozens of felony crimes during the chase and prosecutors will have an array of charging options, which have not yet been announced.