Sheriff Mike Lewis acknowledged that law enforcement agencies have been forced to "lower standards" in the post-defund-police era. 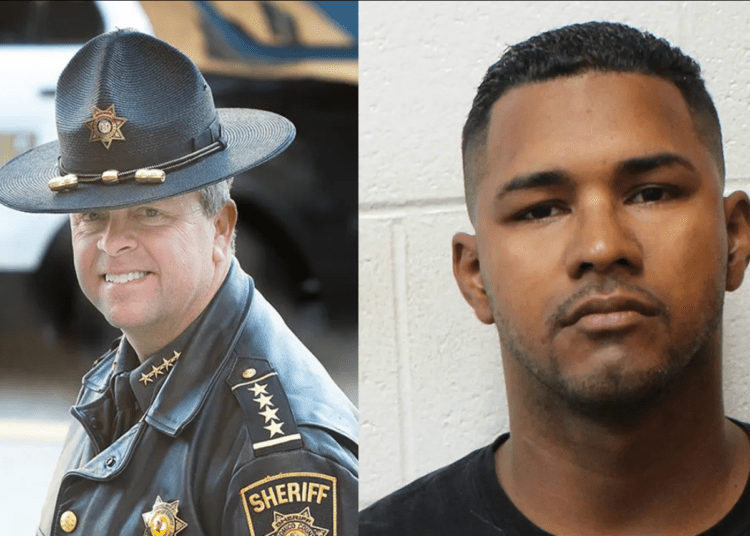 WICOMICO COUNTY, Md. – A county sheriff in Maryland regrets hiring a deputy who is accused of an on-duty rape. The sheriff also laments what has become “lower hiring standards” in the post-defund-police era after he fired the deputy who is facing multiple sexual assault allegations.

Steven Victor Abreu, 30, is charged with second-degree rape, fourth-degree sexual offense, second-degree assault, false imprisonment, sexual contact while a person is in law enforcement custody and three counts of misconduct in office following an internal investigation into an alleged October incident involving a 27-year-old victim identified in the affidavit only as “JA.”

The rape allegation to which Abreu was charged involves a woman who was intoxicated at the scene of a vehicle collision. The ex-deputy is accused of having sexual intercourse with her inside a marked patrol unit in the parking lot of her apartment complex, according to the sheriff.

“You’re talking about a uniformed deputy wearing a badge with a gun, with body armor. I don’t care if she consented or not. It is not consensual intercourse,” Lewis said. “It was not just wrong. It was not just a violation of policy procedure. It is a criminal act. And he will be charged accordingly.”

On October 30, 2022, the Wicomico County Sheriff’s Office received a complaint regarding Deputy Steven Abreu. The matter was immediately assigned to the Criminal Investigation Division. Subsequent to interviews with witnesses and consultation with the Office of the State’s Attorney for Wicomico County, Abreu was taken into custody and charged with Rape Second Degree, Sexual Offense Fourth Degree, Assault Second Degree, False Imprisonment, Sexual Contact while a person is in law enforcement custody and Misconduct in Office (3 counts). (Wicomico County Sheriff’s Office)

Additional allegations of misconduct levied against Abreau from the women who came forward after his arrest range in degree of severity from inappropriate conversations during traffic stops to exchanging phone numbers, along with one encounter that involved Abreu having sexual intercourse with a woman.

The first rape allegation in addition to the remaining accusations of misconduct remain under investigation. As a result, additional charges may be forthcoming, the sheriff said.

Lewis has served for 10 years as the elected sheriff of Wicomico County, with an overall 36 years of law enforcement experience. He explained to Fox News Digital how agencies are suffering severe staffing shortages, forcing them to lower hiring standards.

“I’ve always loved this profession like no other. But right now, our rank and file, we are demoralized,” Lewis noted. “Because Maryland lawmakers have practically legislated us out of a job, no one wants to come into Maryland law enforcement anymore. Our rank and files are shrinking all over the nation. It’s not just Mike Lewis of Wicomico County. It’s every sheriff in this nation.”

“It’s very difficult to recruit good quality candidates,” he continued. “So what do we find ourselves doing? Hiring people that didn’t wow us during the interview. But we need warm bodies on patrol still in these vacancies that we have within our agencies. And inevitably, what does that do? It lowers our standards. This is how individuals are able to get through the cracks.”

Abreu was in his first year of employment with the Wicomico County Sheriff’s Office. He completed 26 weeks of training at the academy and another 10 weeks of field-training before beginning solo patrols Aug. 25, according to the news outlet.

“We are scraping the bottom of the barrel to get, first of all, to get any interested candidates in being a sheriff’s deputy today because we’ve been so demonized,” Lewis told Fox. “Then when we do get someone interested in this job. It’s very difficult for them to pass through the process.”

“He didn’t wow anybody, and we didn’t select him the first time, but he came back,” Lewis said of Abreu. “He showed us that he really wanted to be a deputy. He passed everything, but he didn’t wow us. But guess what he had that most applicants don’t? He was a minority. And I’m always looking for greater diversity within the rank and file in my office because I’m under the gun like any chief or any sheriff to hire more diversity.”

Although he didn’t really impress staff members, Abreu ultimately passed a full written test, a physical agility test, a polygraph examination, a psychological examination and an interview with a board made up of seasoned commanders within Lewis’ office, the sheriff said.

However, shortly after going into service, a red flag appeared. Abreau was caught manipulating his body camera during a traffic stop with another woman. Following an internal review, he was reportedly disciplined and docked four days of pay.

The sheriff didn’t fire him despite fallout from the encounter since he thought he’d “straighten out,” but that did not occur.