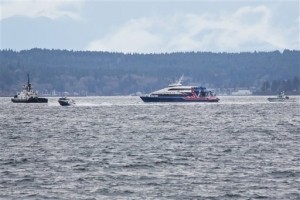 SEATTLE (AP) — A sex offender who authorities say managed to steal one of the boats used for Seattle-to-Canada ferry service had his bail set at $200,000 as company officials reviewed security procedures to try to prevent trespassers from getting on board the vessels in the future.

"We were very, very fortunate this individual did not run into a state ferry or grain ship out by the grain terminal," Clipper Vacations CEO Darrell Bryan said. "It was a hell of a wake-up call."

Samuel Kenneth McDonough was arrested by a SWAT team that boarded a Victoria Clipper on Sunday, seven hours after the ship motored away and drifted in Elliott Bay. McDonough, 33, was jailed for investigation of burglary, reckless endangerment, malicious mischief, and an outstanding warrant for failure to register as a sex offender.

A King County judge set his bail Monday and prosecutors have until Wednesday to formally charge him. It wasn't known whether McDonough has an attorney of record who could comment on his behalf. In a probable cause statement released Monday, McDonough told police he did not know how to operate the vessel or its lights.

Clipper ships make daily runs from Seattle to Victoria, British Columbia. Victoria Clipper is popular with tourists and ferries about 300,000 passengers a year.

Many are wondering how the ferry, valued at $8 million, was pirated away in an incident that could have done severe damage to other boats and the bay. The 480-ton boat had 1,300 gallons of diesel on board.

Bryan says the intruder apparently climbed through a gap over an 8-foot chain link fence to enter Pier 69.

The intruder somehow boarded one of three Clipper ships and started the engine on the 132-foot catamaran. He untied a couple of ropes but broke or damaged two cleats — metal fittings used to tie ships down — to clear the dock.

"We think the guy knew enough to get going but not enough to handle the hand controls," Bryan said.

Bryan had arrived early for a meeting with captains and noticed one of his ships drifting away. He called the Coast Guard, and Seattle police and Port of Seattle police also responded. Negotiators tried for hours to talk the man into surrendering, but eventually the SWAT team boarded the ferry.

A bomb-sniffing dog checked the vessel before it was returned.

The man had taken a laptop computer from the wheelhouse and perfume from an on-board duty-free shop, Bryan said.

The company was reviewing its security with the help of a maritime consultant and was also talking about the incident with the Coast Guard, Bryan said. Port of Seattle police were also investigating.

Barbed wire has already been strung through the gap that the skinny intruder crawled through, Bryan said. It's unclear how he started the engines.

"This should never have occurred," he said. "He shouldn't have been able to get into the wheelhouse. It's supposed to be locked."

McDonough was convicted of indecent exposure in 2005, 2008 and 2012, Department of Corrections spokeswoman Norah West said. He's on a GPS monitor, which is how many homeless sex offenders are tracked.

He had been jailed for violating conditions and was released Wednesday and outfitted with a new GPS device.

According to court papers released Monday, McDonough told police he wanted to go to Victoria.

"We would have preferred he found another means," Bryan said.