Robert Briandi is accused of trying to rob an 83-year-old woman of her purse prior to advancing on an officer while armed with a knife. 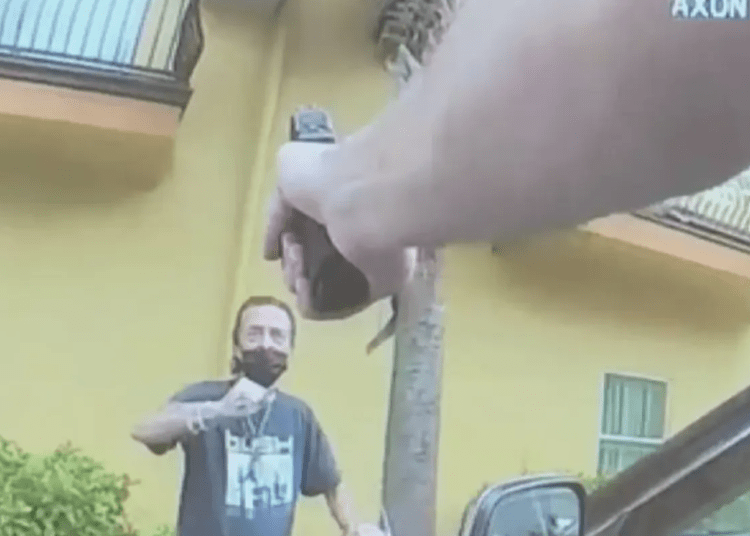 An officer shot a man charging with a knife. (Sarasota Police Department)

SARASOTA, Fla. – An armed man accused of trying to rob an elderly woman in a Publix parking lot was shot by an officer with the Sarasota Police Department following a chase and confrontation, which was captured on bodycam video.

The suspect was identified as 70-year-old Robert Briandi. He is accused of being armed with a knife and trying to snatch a purse from an 83-year-old woman who was loading groceries into her vehicle at a Publix. Approximately 10 minutes transpired before an officer confronted the armed suspect, according to law enforcement authorities, FOX 13 Tampa Bay reported.

“Drop the knife, drop the knife,” an officer with the Sarasota Police Department can be heard yelling at the suspect

Briandi then takes several steps toward the officer — a 17-year veteran — before he fires at the advancing attacker, according to the news outlet.

The Sarasota Police Department received 911 calls around 10 a.m. Tuesday after Briandi reportedly engaged in a robbery of the elderly woman’s purse. However, she fought back and others rushed in to assist her, police said.

“She did a heck of a job fighting him off,” Captain John Todd said. “She was attacked from behind with an assailant with a knife she did a really good job of protecting herself.”

Briandi fled the scene, but a witness recorded the suspect on a cell phone and followed him to a nearby Homewood Suites hotel, FOX reported.

“This good Samaritan went above and beyond the call of duty, but I think without his actions we might not of had such a quick conclusion of the event,” Todd noted.

Robert Briandi is accused of engaging in an armed robbery of an 83-year-old woman for her purse. (Sarasota Police Department)

Briandi survived the shooting and is reportedly in stable condition following surgery. He has a criminal record in New York and Florida that dates back to the 1970s, police said.