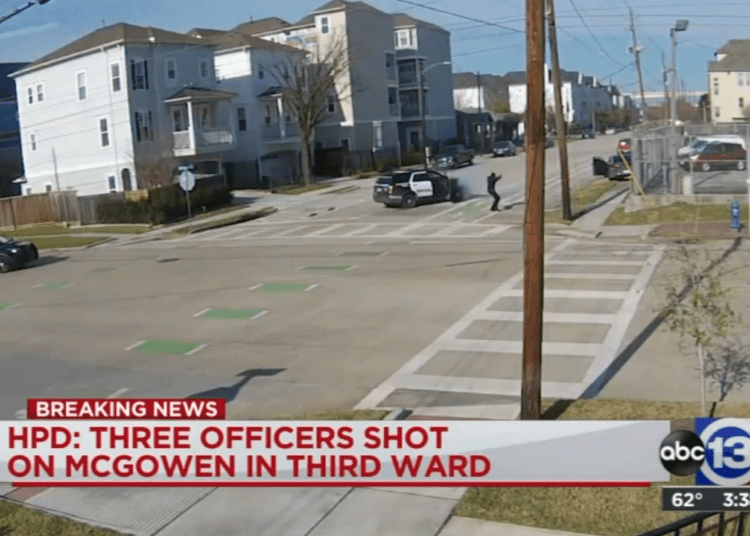 A manhunt is underway in Houston after three police officers were shot. (Screenshot ABC 13)

HOUSTON – The man accused of wounding three Houston police officers in a shootout near downtown has been shot at a separate location, according to sources.

Roland Caballero was identified as the gunman who opened fire on the officers following a chase in the 2100 block of McGowen Street, ABC 13 reported.

3 @houstonpolice shot this afternoon in Houston. Their injuries described as non-life threatening. The suspect, Roland Caballero, has been shot at a separate location, according to police sources. #abc13 https://t.co/i9YMOV2Q5t

Officers said they were responding to a disturbance call at 2:40 p.m. in the 1500 block of Tralle Street when a chase ensued. Caballero crashed out on McGowen where the gunshots were exchanged, but he managed to flee the scene in a white Mercedes, according to HPD.

The unidentified 31-year-old suspect fired at police from a vehicle as officers moved toward him, a reporter with FOX 26 of Houston wrote on Twitter.

NEW: my Police source say 31-year-old suspect who shot 3 Houston officers is barricaded of Lockwood Dr. and shot out of window at police. Still not in custody.

The wounded police officers were all in stable condition, the Houston Police Department tweeted.

UPDATE. Our three injured officers are in stable conditions. Media partners, Chief @TroyFinner will provide a briefing with details on the incident at @memorialhermann Hospital in the Medical Center. #HouNews https://t.co/JbS0RlhWWC pic.twitter.com/9Qol5laYRR

HOUSTON – Police in Houston have launched a manhunt on Thursday afternoon after three police officers were shot, according to law enforcement authorities, Fox News reported.

The suspects fled in a white Mercedes-Benz vehicle, according to Houston police.

The shooting occurred in the 2100 block of McGowen Street. Initial reports from police was that officers were responding to a disturbance call at 2:40 p.m. in the 1500 block of Tralle Street when a chase took place, ABC 13 reported.

3 HPD officers have been shot in the 2100 block of McGowen St.

The suspect fled the scene in a white Mercedes and is being sought at this time. Please avoid the area.

HPD commanders & PIO are en route to Memorial Hermann Hospital where officers are being taken.#hounews pic.twitter.com/I0e2dQD2kB

Surveillance video from the scene shows the moment a chase came to an end when the suspect crashed on McGowen Street. Suddenly, shots were fired as soon as officers arrived at the location.

At some point, the suspect managed to exit the vehicle and fled the scene. According to police, they are actively searching for the gunman.

The officers were taken to Memorial Hermann Hospital. Their conditions are presently unknown, according to ABC 13.

A manhunt got underway in Houston on Thursday afternoon after three police officers were shot, authorities said. (Screenshot KPRC-TV)