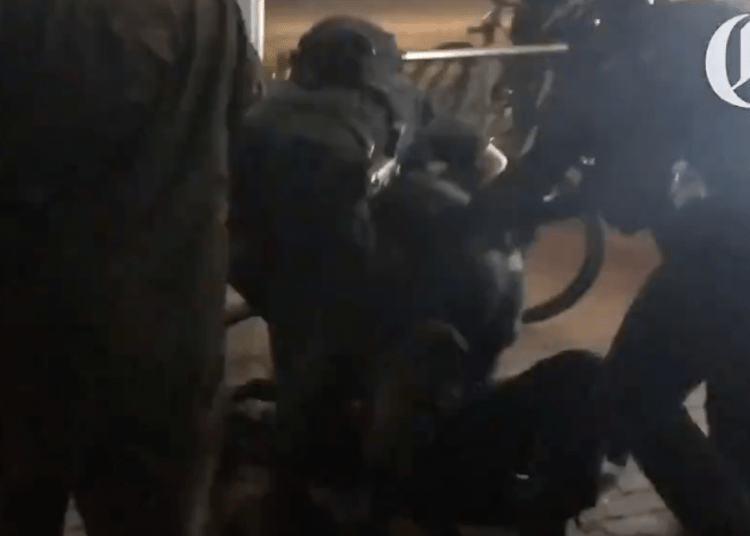 PORTLAND, Ore. — Video emerged out of Portland, Ore., hours after the Derek Chauvin guilty verdict that police said showed an officer being surrounded and then sucker-punched in the face by a masked individual dressed in black.

The Oregonian newspaper posted the video and reported that there had been a heated confrontation. The officer who was struck grabbed onto the individual as he fell and then other officers came to his defense. Fox News reported that one of the paper’s journalists took the footage.

An Officer is surrounded and punched in the face and ends up on the ground on his back with the suspect on top. This was a very dangerous situation. Subject was arrested. https://t.co/JbkDSWybFE

The Portland Police Department responded to the paper’s tweet of the video and said, “An Officer is surrounded and punched in the face and ends up on the ground on his back with the suspect on top. This was very dangerous situation. Subject was arrested.”

Spray paint and a glass break tool seized as evidence from an arrested person tonight. pic.twitter.com/JrL8SfAGLl

KOIN reported that a large group assembled near the city’s Justice Center on Tuesday night after the Chauvin verdict and some broke windows at businesses in the area. The report said that traffic was blocked in some areas and some tagged the Justice Center with graffiti.

Police declared an unlawful assembly at about 10 p.m. Two individuals were arrested, the report said.

The gathering comes a day after a group of about 80 marched through Northeast Portland and smashed windows of businesses and non-profits, including the Blazers Boys & Girls Club. Last week there were 3 riots in Portland from similar events, according to KOIN.