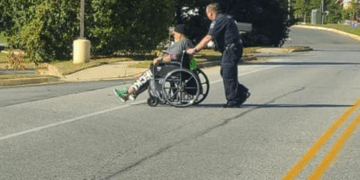 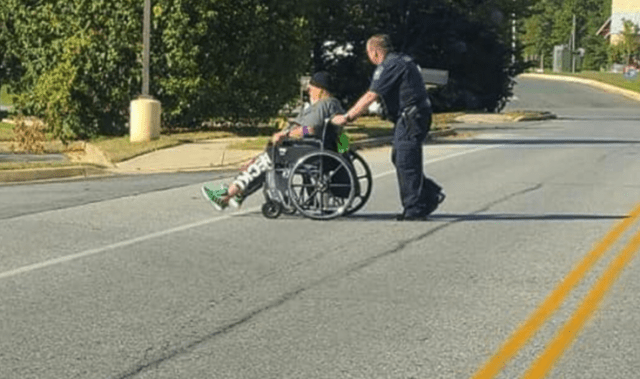 Cpl. Gray Maloy spotted someone in a wheelchair who wanted to cross a road in Mechanicsville on Oct. 5, and stopped traffic to help the man cross the street. (Donald Hollingsworth/Faceboo)

ST. MARY’S COUNTY, Md. — A random act of kindness by a police officer in Maryland is going viral.

On Oct. 5, Cpl. Gray Maloy had noticed a person in a wheelchair who wanted to cross a road in Mechanicsville, the St. Mary’s County Sheriff’s Office relayed on a Facebook post.

As a result, Maloy situated his police unit in traffic in order to make the crossing safe.

Next, he exited his vehicle and helped push the man’s wheelchair across the road, before driving off to his next destination.

Several people snapped photos of Maloy’s act, sending them to the sheriff’s office.

After posting the photos to their Facebook page, the sheriff’s office received over hundreds of reactions and shares.

“Officer Maloy is always an example of professionalism,” one person wrote.

“So proud of our Sheriff’s Department! Class and integrity starts at the top and works it way down,” another person commented.

Among the positive comments on the post, some said the officer’s actions showed how others need to also be on the lookout for ways to help in their community, Fox reported.

“We all need to be aware of people in need,” one person wrote. “Thank you for helping and all of us need to pay it forward.”