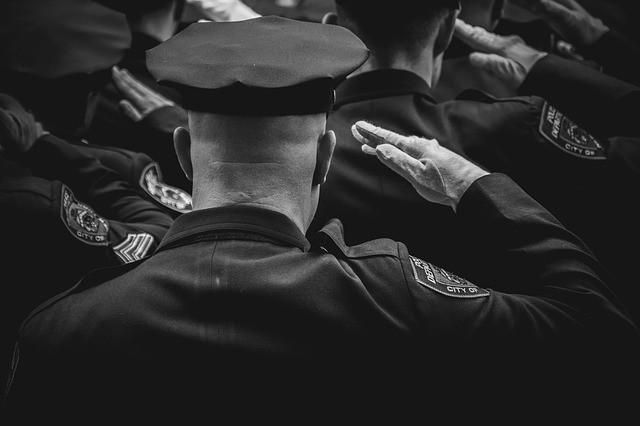 Let me tell you why police lives matter.

There are few career fields that routinely deal with death like law enforcement. And there are fewer vocations that realistically have the grim reaper showing up at their doorstep like a cop.

While many professions deal with tragedy and the demise of other human beings, no other group of professionals sustain serious injury and death like police officers due to their profession, outside of the military. Indeed, law enforcement professionals stand next to our military family in this morbid category.

Moreover, peace officers serve selflessly their communities to protect every classification of person, even as their own categorization is maligned by a growing percentage of humanity. Although it seems like everyone hates police, we are grateful the majority of our citizens still appreciate our work, and express their opinions publicly. We simply wish it occurred more often.

Tools of the Trade Represents Conflict

When cops Velcro body armor in place and attach the duty belt or load-bearing vest, it’s a sobering process. The tools of the trade—firearm, ammunition, Taser, handcuffs, pepper spray, asp, etc.—are carried because the work gets violent. Controlling a combative person is difficult in a controlled environment. It’s another story altogether on the streets when officers have “rules of engagement” and the crooks do not.

Reflecting on Family Is Lifesaving

As a result of this reality, most police officers kiss their family goodbye each day with these thoughts in the back of their mind—Will I be involved in a violent or deadly encounter today?

It’s been said in the past that a peace officer suffers a line of duty death every 53 hours (currently one every 55 hours for the past 10 years, according to the National Law Enforcement Memorial Fund). Therefore, the number of officers that DO NOT make it to a service retirement are off the charts. Even putting fatalities aside, a majority of our heroes leave police work prematurely due to physical and mental injuries, burnout, or other factors that are not present in most career fields.

Most law enforcement officers can tell you the meaning of every 53 hours. The reality is that a father, mother, brother, sister, son or daughter is taken from their loved ones for a variety of reasons. Rationale that is primarily absent in safer lines of work.

Since 1944, there has not been a year in which less than 100 law enforcement officers have lost their life in the line of duty, according to NLEOMF. And even then, 96 perished while protecting their communities.

Soberingly, crime fighting has taken its toll. Since the first recorded police death in 1786, there have been over 21,000 law enforcement officers killed in the line of duty. Currently, there are 21,910 names engraved on the walls of the National Law Enforcement Officers Memorial. Thus far in 2019, there have been 44 police officers and five K9s whose names have been added to the roles

While perusing through the archives of 2017 I noticed the longest period of time between line of duty deaths was merely 11 days. What a heartbreaking reality!

Sadly, there have been many more “unofficial” line of duty deaths related to strange cancers presumably developed by officers working Ground Zero during 9/11.

Regardless of the reason for death, someone had to break the news to the family. This might be the most difficult responsibility a peace officer faces.

Unable to Function in Civil Society

So many reasons attributed to a line of duty death have to do with people that cannot function within civil society. Imagine what kind of world it would be without brave men and women willing to engage in violence on behalf of the public?

Make no doubt there is evil among us. As a result, malevolence is what officers are trying to shield from their communities. Yet tragedy strikes too often and takes them from us. If for no other reason, that is why police lives matter.

Shortsighted pundits and talking heads have repudiated the terms “Blue Lives Matter” and “Police Lives Matter” as if each one were a racist response to “Black Lives Matter.” As I tell my K9s, “Pfui” (pronounced foo-ee), which means, “no” or “stop that.” We cannot let angry people highjack these well intentioned, meaningful terms showing affection for our sheepdogs.

I believe LIFE MATTERS. And since life matters, we need peacekeepers available to protect the innocent, vulnerable, and the unaware from harm. That is what cops do in America. Naturally there are variations, but as an industry, police officers do their best to shield people so they can live in peace.

Indeed life matters, and POLICE LIVES matter just as much as the next.

Peace Officers Are More Than Cops

So the next time you hear someone vilifying an entire profession, remember the vilified are more than cops. They are family members, little league coaches, and church and community volunteers among other things.

Finally, police officers are equal opportunity protectors. As a result, they should be applauded. So many of those protected by their presence during these volatile protests deserve to be taken to the wood shed. Yet we professionally deal with their destructive tactics and keep the peace.