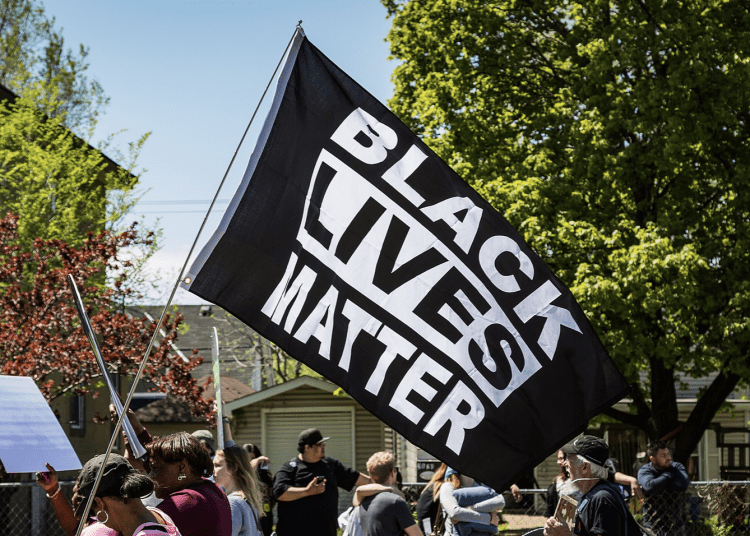 While the “Thin Blue Line” flag are being canceled, the State Department has authorized the display of the Black Lives Matter flag. An internal State Department memo was leaked by an anonymous whistleblower, Daily Wire reported.

The leaked memo indicates the State Department’s sanctioning of BLM flags and banners at U.S. “Diplomatic and Consular posts.” According to the Daily Wire, the memo, first reported by Jack Posobiec at Human Events, prefaces the guidance on BLM in relation to the upcoming anniversary of George Floyd’s death:

May 25 marks one year since the brutal murder of George Floyd by police officers in Minneapolis, Minnesota. Last year, the horrific video of Mr. Floyd’s final 9 minutes and 29 seconds went viral and spurred Black Lives Matter protests worldwide, in response to his senseless killing and to demand an end to systemic racism and police brutality. One year later, many in the international community will honor Mr. Floyd and acknowledge the long journey nations face to advance racial justice. Leading up to May 25, the Department has issued guidance on the use of Black Lives Matter language, banners, and flags.

“The memo, which is in part a woke statement on social justice, part an apology for U.S. actions, and part an endorsement of all BLM materials, expressly encourages the display of the BLM flag or banner at U.S. facilities (except on the actual flagpole that holds the American flag),” Human Events reported.

“… Chiefs of Mission may decide to hang BLM flags, as appropriate and depending on local context. This cable constitutes a blanket written authorization for calendar year 2021 from the Under Secretary for Management (M) to display the BLM flag on the external-facing flagpole to any Chiefs of Mission who determine such a display is appropriate in light of local conditions,” the memo says. “This is an authorization, not a requirement.”

If ever there was evidence that our current administration is disregarding the will of the people, this is it.

Posobiec put it succinctly in his piece:

“Despite the documented actions of BLM protestors during the riots of 2020, and despite the New York Times reporting on their organization’s declining popularity with American voters, our federal  government has nonetheless decided to endorse and promote an organization with admitted Marxist roots as one having ties to our official foreign offices.”

And the idea that this is an “authorization”—and not supposedly “not a requirement”—is little more than an absurd caveat to dismiss blame.

Cops are used to lies and liars and people hiding the truth. But this memo makes the it perfectly clear that in the land of the red, white, and blue, the black flag matters—the blue does not.