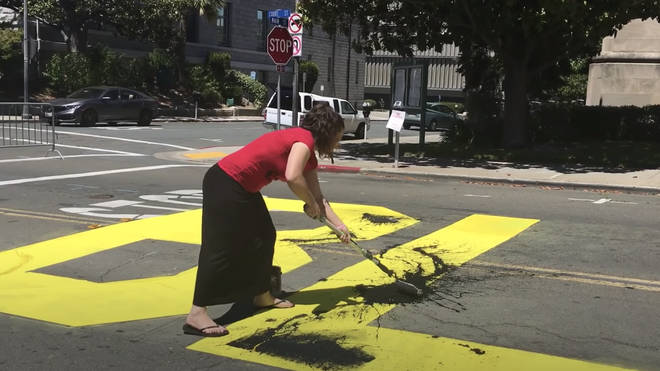 Police in California charged a man and a woman with hate crime on Tuesday for allegedly painting over a Black Lives Matter mural that was painted on a public street.

According to The Daily Wire, the Contra Costa County District Attorney’s office announced that Nichole Anderson, 42, and David Nelson, 53, were being charged with three misdemeanor counts, including a hate crime, for the incident, which allegedly happened on Saturday.

Martinez, California couple Nichole Anderson and David Nelson have been charged with a hate crime for defacing this Black Lives Matter mural. pic.twitter.com/8ylxx5qfNc

“On July 1, a local Martinez resident applied for a permit to paint a Black Lives Matter temporary mural in downtown Martinez in front of the Wakefield Taylor Courthouse,” the Contra Costa County District Attorney’s office said in a statement. “The permit was approved by the City of Martinez and the painting was done on July 4.”

“Anderson covered up a Black Lives Matter mural with black paint,” the statement added. “Nelson directly aided in the alleged criminal conduct. The incident was captured on video by witnesses.”

CHURCH PROVIDES $1000 TO EVERY OFFICER

“Nelson and Anderson arrived at the scene of the mural after it was completed with paint supplies,” the statement continued. “Anderson started to paint over the yellow letters ‘B’ and ‘L’ in the word ‘Black.’ She used black paint and a large paint roller to do so. The video has been shared widely by witnesses and shared on social media.”

We must address the root and byproduct of systemic racism in our country. The Black Lives Matter movement is an important civil rights cause that deserves all of our attention. The mural completed last weekend was a peaceful and powerful way to communicate the importance of Black lives in Contra Costa County and the country. We must continue to elevate discussions and actually listen to one another in an effort to heal our community and country.

Both suspects were charged with Violation of Civil Rights, Vandalism Under $400, and Possession of Tools to Commit Vandalism or Graffiti.

HEY AMERICA, THIS IS WHY I BECAME A POLICE OFFICER

The Martinez Police Department released a statement that said that “the community spent a considerable amount of time putting the mural together only to have it painted over in a hateful and senseless manner.”

“The City of Martinez values tolerance and the damage to the mural was divisive and hurtful,” the statement added.