Narciso Torres, a veteran air traffic controller at the Miami International Airport, died in the crash 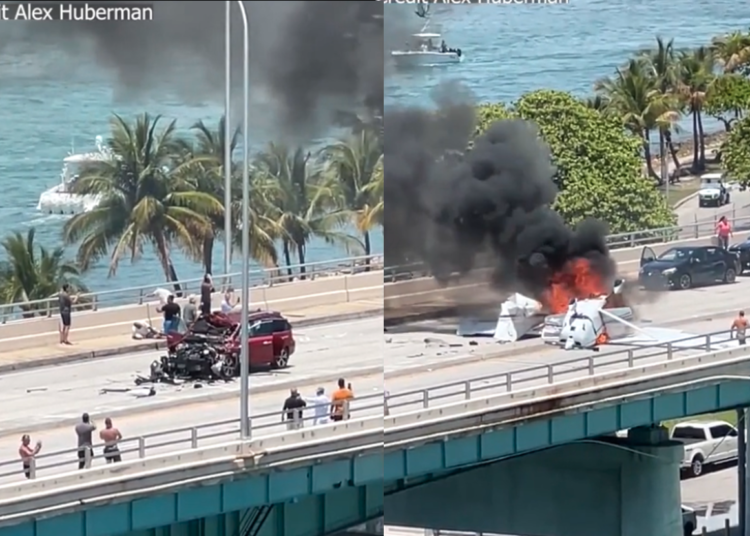 A Cessna 172 crashed into an SUV on a South Florida bridge Saturday. (Screenshot FOX 13 via Alex Huberman)

MIAMI, Fla. – A small plane lost power and performed an emergency landing on a South Florida bridge Saturday afternoon, striking an SUV in the process. The tragedy left one person dead and five others hospitalized with various injuries, according to reports.

The crash occurred on the bridge that connects Haulover Beach to Bal Harbor about 1 p.m. The Bay Harbor Islands Police Department closed the area to traffic as emergency crews worked the scene, FOX 13 Tampa Bay reported.

Officials said there were three people on board the small aircraft — described as a single-engine Cessna 172 — and three individuals riding in the SUV.

Responding officers discovered the occupants of the plane. One was dead and two others suffered traumatic injuries. One of the victims was airlifted to Jackson Memorial Hospital and the other was taken to a local trauma center, according to WSVN.

The occupants of the SUV were described as a woman and two toddlers. All three were transported to an area hospital with non life-threatening injuries.

Law enforcement authorities said the SUV was traveling southbound over the bridge when the Cessna hit it head on. As a result, the plane flipped over and burst into flames.

A passerby recorded video of the scene.

Information from the FAA: pic.twitter.com/avCiYTZF8j

Footage taken from a nearby building shows smoke billowing and flames leaping from the wreckage of the plane, as well as a severely damaged SUV on the bridge.

According to the Federal Aviation Administration, the aircraft took off from Fort Lauderdale-Hollywood International Airport headed for Key West and lost power soon after takeoff.

Speaking with reporters hours after the crash, MDPD Detective Alvaro Zabaleta said, “It is miraculous that you’re traveling in a vehicle, the driver with the two toddlers, and you’re in a head-on collision with an aircraft, and everybody’s OK.”