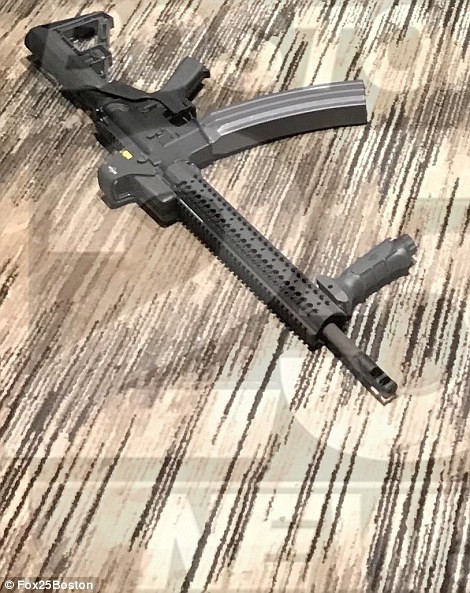 Photo Courtesy: Boston25, This is reportedly one of the weapons that the suspect used which included a bump stock added to make it fully automatic, a scope for accuracy and an oversize magazine to hold more ammunition.

Photos have emerged of one of the 23 rifles found inside Las Vegas shooter Stephen Paddock’s hotel room, which he used on a crowd of 22,000 attending a music festival on Sunday.

The photos, obtained by Boston 25, show one of the weapons to have a ‘bump stock’ added to make it fully automatic. That gun also had an over-sized magazine attached.

It took police 72 minutes to zero in on Paddock’s hotel room on the 32nd floor of the Mandalay Bay Hotel and Casino across the street from the festival.

They say he had cameras set up in the hallway so he would know when authorities arrived. Paddock continued to fight even as police breached his room – firing through the front door at officers. But by the time the SWAT team finally made it into the room, Paddock had killed himself.

You can view additional photos here.

Share and speak up for justice, law & order...
Tags: riflevegas

VIDEO: Jammed weapon not enough to save life of man walking dog