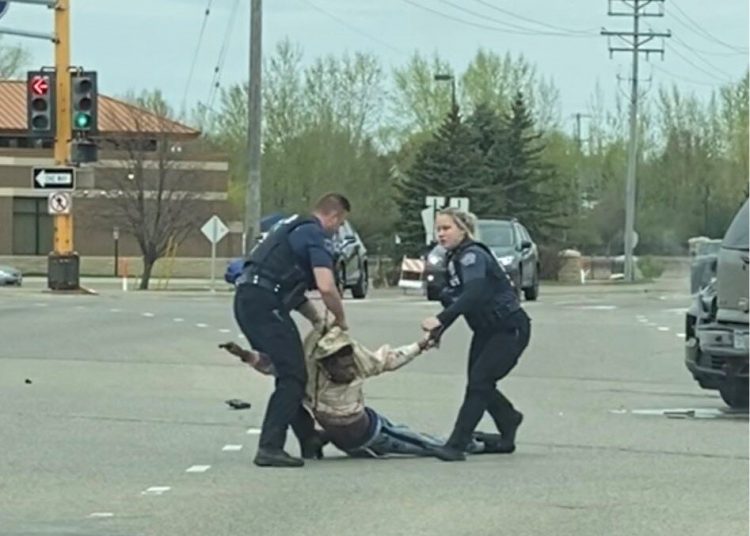 Minneapolis, Minnesota – Wild and crazy police pursuits were common a few years ago and it is rare we see this today but criminals still do what criminals do and the Minneapolis area had a pursuit with a shooting suspect and it is something that you have to watch. Officers had been tracking the suspect throughout Tuesday morning after a rifle was used in a shooting.

The pursuit started in north Minneapolis after an attempted traffic stop of the vehicle. The suspect drove off at a high rate of speed, eventually southbound on Hwy. 100, then west on Hwy. 55.

Officers used a PIT maneuver to disable to vehicle near Hwy. 55 & Peony Ln. and made a felony stop, with guns drawn as they pulled each occupant out.

This is video from approximately 2:00 today in Plymouth at Highway 55 and Peony Ln. Different reports suggest this was the end of a lengthy pursuit lasting hours through multiple cities with five occupants arrested and several guns in the vehicle. Worth the watch. NSFW Language pic.twitter.com/msm1aBlmpl

According to MNCrime, five people were arrested and several firearms were recovered from the vehicle, including a rifle.

It’s still unclear which shooting the suspect was wanted in connection with.

According to public court records, one suspect taken into custody has a previous felony conviction in Anoka County for 1st-degree assault. A criminal complaint says that on July 23, 2017, officers with the Columbia Heights Police Department responded to an alley to investigate a report of an intoxicated male. When police arrived, they found a victim suffering from a severe head injury.

Officers learned the victim had been robbed and beaten by several people there. The victim was transported to the hospital where he was diagnosed with several skull fractures, a fractured clavicle, a fractured spine and a brain bleed. It was later determined that the victim’s cell phone and shoes were taken in the robbery.

Surveillance video showed three male suspects kicking, stomping and jumping on the victim’s face and torso while he was motionless on the ground. The suspect eventually pled guilty to 1st-degree assault and received a stayed sentence of 10 years in prison, meaning he would not serve prison time.

Ultimately, he was released from jail on credit for time served, given 60 hours of community service and was ordered on probation for a period of 10 years. A departure report signed by the court said the suspect would avoid any prison time because he showed remorse and would be particularly amenable to probation. The prosecutor did not object to the downward departure.