VIDEO: Jammed weapon not enough to save life of man walking dog 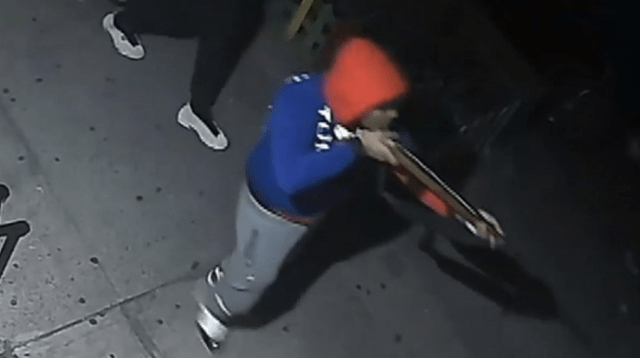 NEW YORK – A jammed weapon was not enough to save the life of a murder victim who was out walking his dog. NYPD has released video showing the moment a rifle-wielding suspect opened fire on the man and his dog during their walk.

Surveillance footage taken from a camera in Manhattan’s Harlem neighborhood early Monday begins with the suspect—who has not yet been captured—hiding the weapon behind his body with one hand, and using the other to take a phone call.

As a man walks by, the suspect takes aim at the individual’s head, holding the barrel of the weapon just feet away from it. Police sources told the New York Post that this man was his intended target, but the weapon jammed after a single round was fired.

The suspect flees after managing to fire off one round, which struck the leg of Winston McKay, 40, while he was walking his dog.

McKay, still holding his dog’s leash, fell face-down after he was shot and cried for help. He lost blood until first responders arrived and put a tourniquet on his leg, police sources said.

He was rushed to Harlem Hospital and declared dead a short time later, the New York Post reported.

The Sunday night before the shooting, he had been celebrating his anniversary with his husband, Fox News reported.

“We met 18 years ago on that day, so it was more like a late birthday party, anniversary party thing,” his husband, Terry Solomon, told the New York Post. “He was walking by and just a casualty — walking and he got hit.”

The gunman in the footage, and another man who was seen standing next to him during the attack, have not been identified by authorities.