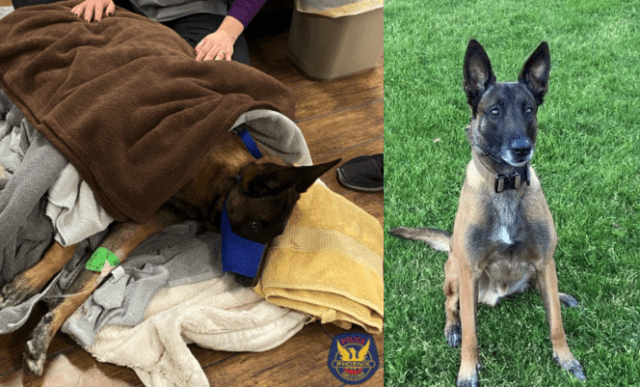 K9 Dennis was wounded in the line of duty after being deployed to capture a murder suspect. (Phoenix Police Department)

PHOENIX — A suspect is dead and a police K9 is considered a hero after an officer-involved shooting in Phoenix early Thursday morning, the Phoenix Police Department said.

Phoenix police said the incident began when officers responded to a report of shots fired shortly after 3:30 a.m. Upon arrival to the area in question, officers found a man who was dead.

During the search for the homicide suspect, police officers were directed to a nearby apartment complex, azfamily.com reported.

According to police, K9 Dennis was deployed and the first to enter the suspect’s apartment. As a result, he was shot by the gunman. At that point, officers retreated from the unit. However, the suspect, a man in his 40s, came out armed with a weapon.

K9 Dennis, a 6-year-old Belgian Malinois, was transported to an area animal hospital and is expected to make a full recovery, according to Justus. He is being credited with saving the lives of the officers who first responded to the suspect’s apartment.

Thank you for keeping K9 Dennis and his handler in your thoughts and prayers as he continues to make improvements. ??? pic.twitter.com/jef4zObGZf

It wasn’t immediately confirmed the suspect killed by police had murdered the homicide victim, Justus said. “That’s certainly one of the possibilities that investigators are looking into,” KOLD reported.

No identities were released.

This is the 51st officer-involved shooting in the Phoenix area this year, according to azfamily.com.
Share and speak up for justice, law & order...
Tags: Ann JustusK9K9 DennisoisPhoenix Police Department