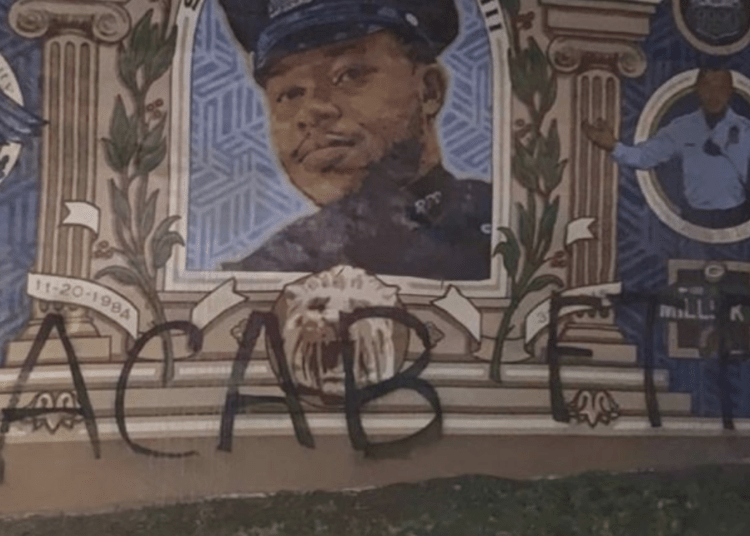 The graffiti scrawled across the mural on Baltimore Avenue in West Philly, included, “ACAB FTP,” ABC 6 reported. The provoking message means, “All cops are bastards,” and “F*** the police.”

The mural honored the life of Sgt. Robert Wilson III, who was shot in 2015 at a Gamestop store. Sgt. Wilson had stopped at the store to buy a gift for his son, only to find himself in the middle of a robbery.

Investigators said that Sgt. Wilson protected civilians when two suspects shot and killed him, FOX 29 reported. He was posthumously awarded the Medal of Valor by President Barack Obama in 2016.

“I’m saddened and angered that vandals would deface the mural of one of our beloved heroes, Sgt. Robert Wilson III,” Police union leader John McNesby said in a statement. “Our thoughts and prayers are with the Wilson family on this sad day.”

“Wilson served our great city with passion and compassion and is sorely missed by his friends and colleagues in the Philadelphia police department. Rest easy, Robb.”

We are aware of this and are getting it fixed immediately. God bless the Wilson family. @PhillyPolice @PPDCommish @PhillyMayor pic.twitter.com/UwMgjjAXkr

Commissioner Danielle Outlaw tweeted a message for the law violators.

To the coward who did this: You didn't earn any extra "woke-points". You're not brave. You're not a revolutionary. You're certainly no hero. And despite all of your failings, heroes like Rob will still answer your calls for help. My full statement below: pic.twitter.com/jnTkIGdAPq

The Philadelphia Fraternal Order of Police is offering a $10,000 reward for information that leads to an arrest.