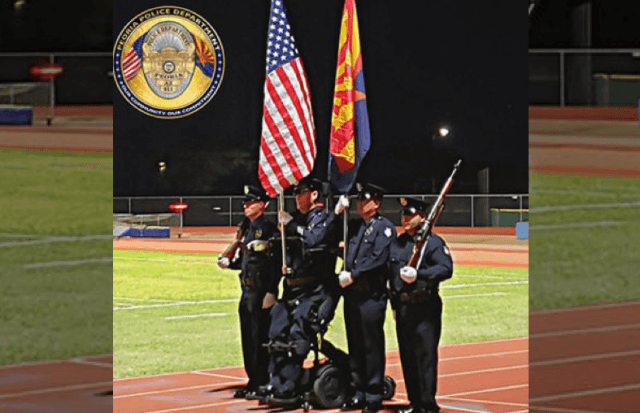 PEORIA, Ariz. – A paralyzed Peoria police investigator who was shot and permanently wounded in the line of duty 14 years ago was able to stand to present the colors during the Special Olympics Arizona opening ceremonies. Joyfully, it was the first time he’s been able to stand upright since being paralyzed, thanks to his new high-tech wheelchair. (Watch two videos below.)

Investigator William “Bill” Weigt, a former U.S. infantry soldier, was one of several Peoria police officers who responded to a report of a shooting at approximately 4:30 a.m. on Dec. 17, 2005, the Peoria Police Department said in 2017.

The gunman fled the area in a vehicle, then led officers on a brief pursuit when they spotted him.

At one point, the suspect stopped in the middle of the street and opened fire on the pursuing officers, police said.

One of the rounds hit Investigator Weigt just above his ballistic vest, resulting in severe damage to his spinal cord, WTHR reported.

The gunman was killed during the shootout.

Despite the severity of his wounds and the permanent paralysis caused by the bullet, Investigator Weigt returned to duty in less than a year, the Peoria police said.

“I’d been wanting to stand for the national anthem for 14 years,” Investigator Weigt told Today. “I was a little overwhelmed at first, but it was so exciting.”

Peoria Police Department shared a photo and video footage of Investigator Weigt and his fellow Honor Guard members as they participated in the Special Olympics Arizona opening ceremonies on Oct. 25.

At the conclusion of the ceremony, the investigator was surrounded by athletes who gave him hugs and posed for photos, Today reported.

Moreover, his nephew, Andrew, was among them.

“That was probably the most special thing,” Investigator Weigt told Today.

When he got into his car to leave later that night, he became emotional while reflecting on the totality of everything that had just occurred, he explained.

Investigator Weigt said he is especially grateful that others with disabilities view him as an inspiration.

He is also thankful for his Permobil F5 motorized chair, which allows him to lay, stand or sit.

“I had lot of spasms and pain,” the investigator told Today. “Being able to change positions helps with that. I feel good.”

Furthermore, the grateful man called his new chair a “blessing.”

“Of course, I would like to go and get my body back, but I can’t, so I make the best of what I’ve got,” Investigator Weigt said. “And I have a really great life.”