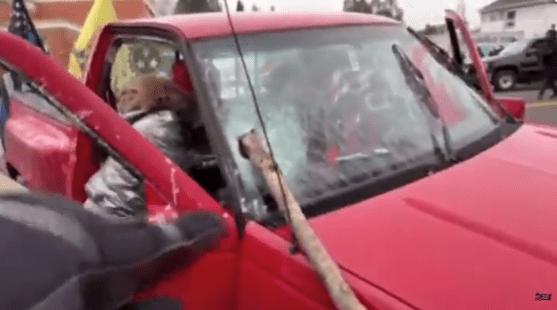 SALEM, Ore. — Three people have been arrested and lodged at the Marion County Correctional Facility following violence at the Oregon state Capitol building linked to clashes between right-wing protesters and Antifa left-wing counter-protesters.

According to a press release by the Salem Police Department, the individuals arrested include 34-year-old Andrew Alan Foy, 33-year-old Nathan McFarland and 18-year-old Anthony Villaneda.

Police said that the first event by right-wing protestors, billed as the Freedom Rally, appeared on social media in February.

Meanwhile, a second event appeared soon after, dubbed Fascist Free 503, indicating a counter-response to the Freedom Rally. Social media posts connected to the group indicated their intention to prevent the Freedom Rally caravan from meeting at the state capitol, Fox News reported.

#salemoregon UPDATE at 1415
1⃣/4⃣: Protest events at the @OregonCapitol have increased in size/risk to public safety. There are approximately 150-200 participants that are heavily armed at the capitol at this time.

At around 2:15 p.m., police warned that the protest had increased in size and risk to public safety.

“There are approximately 150-200 participants that are heavily armed at the capitol at this time,” police said in a Twitter thread, noting that counter-protesters were expected to arrive in large numbers.

A rioting #antifa militant was nearly run over by a truck at the Oregon state capitol in Salem. #Antifa have gathered there today with weapons. They're throwing rocks at vehicles passing by. Police are not getting involved. pic.twitter.com/vVwpssNDPQ

#Antifa impaled the red truck with a large tree branch during their mob attack on the vehicle outside the Oregon state capitol. There was a female passenger in the vehicle at the time who was nearly killed. #AntifaRiots pic.twitter.com/WZARAZoT5A

Soon after the protesters’ arrival, the Salem Police Department began to receive reports that individuals from the Court Street group were targeting vehicles driving by, Fox reported.

Victims reported their vehicles were damaged by paint filled balloons, rocks and other hard objects being thrown at them as they passed. One vehicle sustained significant damage after a large tree limb was thrown through the front window into the vehicle’s passenger seat.

Furthermore, officers closed Court Street in response to the criminal activity, allowing Oregon State Police and Salem Police crowd management teams to respond to the area and declare the gathering an unlawful assembly. In addition, the closure deterred the Freedom Rally Caravan from entering the area.

Law enforcement authorities gave audible announcements warning the crowd on Court Street to disperse, before successfully moving the individuals onto the Capitol Mall. No force was used as the protesters complied with commands.

However, the dispersed crowd began marching along various streets surrounding the capitol grounds, which resulted in several altercations and property damage, including one reported incident of paintball guns being used and a firearm displayed, Fox reported.

According to Salem Police, personnel deployed less-lethal munitions in their apprehension of two suspects.

Authorities noted that these are open criminal cases which will continue to be investigated.