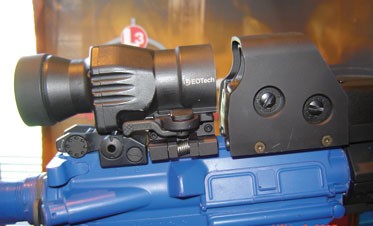 In the early 1970s at my agency, we worked without portable radios but carried .30-caliber M1 carbines. We had a chief who knew weapons and ammunition, and he understood the advantage of what would become known as the patrol rifle. His sole concern was for the safety of his officers and the citizens.

Three decades later, in the wake of too many violent incidents in which police officers faced heavily armed offenders, the patrol rifle is common equipment nationwide. For many years we ve had ongoing training on the patrol rifle for first responders. The younger men and women who received this training have moved up to command and lead. They know the average police officer on the street armed with only a handgun can t successfully engage an active shooter the length of a 50-yard hallway in a high school. So, the patrol rifle is now and will remain the norm.

The violent threats that have driven this trend demand attention to details. One critical detail is threat identification. To stop a threat, you ve got to see it, and you must know what you see. Is an extended hand holding a cell phone, pointing a finger or wielding a pistol?

Fortunately, the continued technological evolution of the patrol rifle and its accessories has provided us with numerous visual-enhancement devices, i.e., gun sights. Some believe the day of the iron-sight system as the sole sight system is going if not gone. Even if this prediction should come to pass, I very much insist on a backup iron-sight system on any patrol rifle equipped with an optical gun sight for street use. All optical systems are subject to failure of some type, and an iron sight provides final insurance.

In my early years of using the AR-15 carbine as a patrol rifle, I carried two different scopes attached to Leatherwood scope mounts in my squad bag a 4x telescopic sight and a non-magnified Aimpoint red dot. The Leatherwood mount attached to the AR s carrying handle, and I could remove it with a very positive return to zero. One problem with this concept was that an offender might not give me the time to stop, grab the correct optic and screw it down.

The military has gone to enhanced gun sights on a wide scale in the ongoing wars overseas. The magnified Trijicon ACOG (Advanced Combat Optical Gunsight), the non-magnified Eotech holographic sight and Aimpoint red-dot sight are several that are in wide use. Each is different and offers varying options.

Eye relief (the distance from the shooter s eye to the scope that allows a full centered view through the optic) doesn t matter as much with the non-magnified Eotech and Aimpoint sights, but it s vital with magnified scopes. For fast and close work, I want a non-magnified, look-through-it-any-way-I-can-see-it gun sight. But when on perimeter or at an extended distance from an offender, magnification provides a significant advantage.

So, how do we get both features? One method: By adding a movable magnifier unit to a non-magnified red-dot scope. Aimpoint and Eotech now offer such add-on magnifiers. Available in either 3x or 4x versions, the magnifier can be used when distance demands it, and when not needed, swung out of the way or taken off, depending on the mount.

I was one of 100 officers from around the nation who shot the inaugural National Patrol Rifle Competition (NPRC) in May 2006. This competition was created by Jeff Felts of Centermass and is based out of Novi, Mich. The event was great, and I found that the courses and conditions were very applicable to actual street work.

When I was in close that first year, all was good. I could see target details, identify threats and engage with confidence. However, the 100-yard targets demanded precise targeting, and the non-magnified Eotech I was using then did not allow detail discrimination at distance. Nor would the Aimpoint or any other brand offering zero magnification. I returned home with a new Smith & Wesson M&P 15 carbine and a determination to find the solution to the distance issue.

To test the add-on magnifier concept when I returned to the NPRC this year, I borrowed a prototype Eotech M-557 scope and a 4x optical expander from Eotech rep John Bailey. While training for the event, I found I was able to use the Eotech alone for close-in work and, when needed, lock in place the magnifier for distance work. This ability to quickly shift my visual field from non-magnified to magnified delivered a huge advantage in viewing details at distance.

One mounting option for the Eotech includes the use of a side-hinged, tip-off mount made by Samson. Larue Tactical makes a similar mount for Aimpoint users. Both mounts allow you to hinge the magnifier to the side, out of the way but not detached. A simple reverse movement relocks the magnifier behind the scope. The Samson unit I used was a prototype and was not fully stable. I understand the production models have addressed this problem. I examined the Larue mount but did not have the opportunity to use it. It looked well made and rock solid. (Larue Tactical is held in very high regard as to its concepts and craftsmanship.) Hopefully the company will offer this mount for the Eotech unit.

Note: I do not see the advisability of removing a magnifier from the weapon, and such a system is not my solution. In the NPRC, if a piece of gear was removed from the gun, it had to remain off the gun for the rest of the match. As Anaheim (Calif.) Police Department s Chris Schneider says, Bring the street to the range, not the range to the street. That philosophy fits here for sure.

Personal preference plays a large part in choosing your rifle optics. Environment and distance are key issues. One of my officers is a Marine returned from multiple combat tours in Iraq. When asked about the rifle-sight preference in urban combat, he said his Marines preferred the non-magnified Eotech for building/room-clearing operations. They chose the issued Trijicon ACOG for convoy and open-ground situations where the magnification allowed the Marines to look into windows and along streets and buildings.

Do I think magnified scopes such as the ACOG are a valuable upgrade for law enforcement? Yes, but I do think they offer a more defined approach. That is, the ACOG, the Schmidt & Bender Short Dot optic and similar scopes of 3x and higher magnification shine as designated marksman units, giving the shooter enhanced target acquisition at distance.

A fellow instructor s agency is using the 1.5x ACOG on all issued patrol rifles. As advertised, it s less restrictive as to eye relief, and the slight power boost is a bonus. Yet a 1.5x magnification is not what I am looking to add I see 3x as the minimum. And when we move to the greater-power level optics, eye relief is an issue, making the unit less close-quarters compatible. (For a review of Trijicon s new 3x ACOG, see Third Degree, p. 10.)

For daily carry, I use a Big Sky rifle rack inside my vehicle. If I add bulky optics, the carbine will not fit the rack. (As my training partner Big Al says, No good deed goes unpunished. ) So, care must be taken not to solve one problem and create another. If I fix the optics problem but then must relocate the rifle to a trunk lock box, I have a delayed-access problem. All optical assistance is useless if I don t have immediate access to the rifle when I need it.

Whatever your preference in optics, weigh the following factors when choosing a unit for your rifle:

Bulk. Fortunately, they are getting smaller;

Weight. Fortunately, they are getting lighter;

Cost. These units with mounts will run near or over $1,000, which costs more than a basic rifle. Cost will remain high, as is true of all good quality gear; and

Environment. Is the scope affected by weather/fogging? Can the shooter see the target through the scope at high speed, in low light and daylight with both eyes open, and also clearly identify the threat at distance?

Our future choices in enhanced patrol-rifle optics will continue to increase. The ability to see threats faster and target them more accurately at long distances is a life-saving step forward.