Rachael Zion Clay is being held on $1M bond for "shooting with intent to kill." 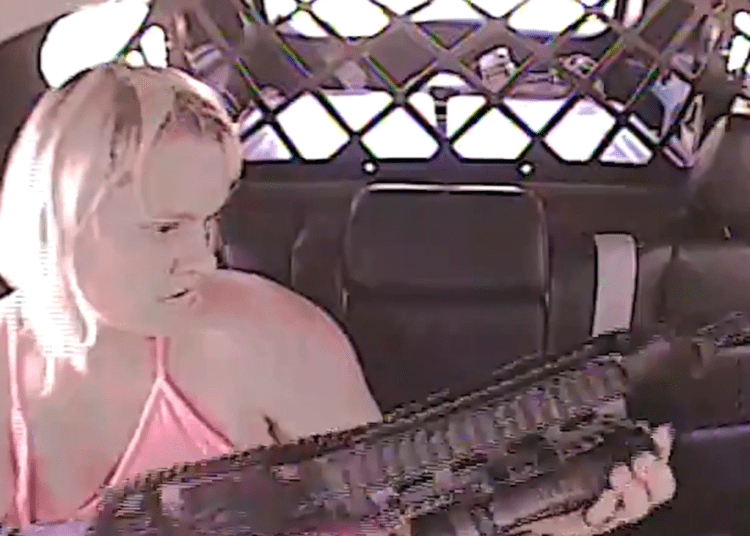 GRADY COUNTY, Okla. – Law enforcement authorities in Oklahoma have released stunning dash and bodycam video that shows a handcuffed woman retrieving a rifle and firing it out the back of a patrol unit. The suspect struck both a citizen and deputy during the shooting, according to reports.

Deputies with the Grady County Sheriff’s Office responded to a wellness check/mental health call at a residence in Blanchard just before noon on Aug. 12.

A woman, later identified as Racheal Zion Clay, was reportedly “in the front yard barking like a dog and crawling on the ground” when deputies first arrived, True Crime Daily reported.

When Clay was placed in the marked patrol SUV, however, she reportedly “somehow got the opportunity to slip her handcuffs and get to a firearm and started to fire on law enforcement officers and on other civilians in the area.”

Video taken inside the vehicle shows her fidgeting around in the backseat, slipping one hand out of her cuffs and manipulating the AR-15. She charges the weapon and aims out the window and begins firing, Fox News reported.

Deputies bodycams recorded the civilian suffering a gunshot wound in the chest. A deputy also sustained a minor injury when a bullet grazed his head, according to authorities.

Grady County Undersheriff Gary Boggess said a bullet “did a ricochet off the tree and then glanced off and hit my deputy in the back of the neck and then also hit the civilian in the chest.”

The victims quickly maneuvered to take cover behind another law enforcement vehicle. The wounded man’s son was nearby and is seen running over to assist with first aid as deputies call for backup and EMS.

While barricading herself in the deputy’s SUV, Clay wrote notes on paper and placed them in the window, some of which said, “I killed one,” and “Kill any cop that tries to approach,” among others.

Both victims were hospitalized with injuries that were not considered life-threatening, according to authorities.

Clay is being held at the Grady County Jail on $1 million bond on the charge of “shooting with intent to kill,” according to county records.