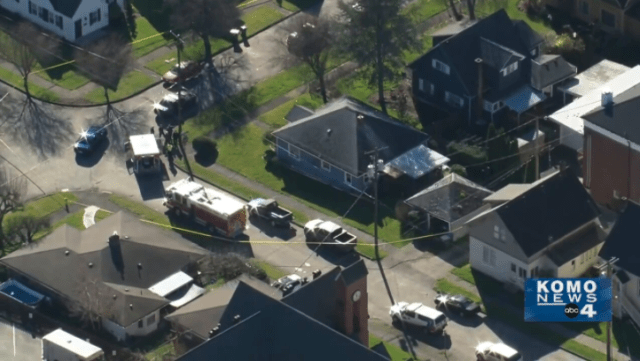 A suspect wanted for raping a child was fatally shot after stabbing an officer in the head. (Screenshot KOMO News)

CHEHALIS, Wash. – The Lewis County Sheriff’s Office is investigating an incident that left one officer seriously injured, and a suspect dead following an attempt to arrest the man in Chehalis Friday.

The suspect, whose name was not disclosed, reportedly reached for a weapon as deputies approached the residence, the Lewis County Sheriff’s Office said. A Pierce County deputy fired at the man who then fled, apparently without being hit.

After two hours of searching for the wanted individual, a police K9 was able to locate him. A Centralia police officer making contact with the suspect was then stabbed in the head and back area, according to the sheriff’s office, KOMO News reported.

In response to the stabbing attack, officers of the Centralia Police Department shot the violent suspect, who was pronounced dead at the scene.

The officer who suffered the stab wounds was transported to an area hospital. Following surgery, the unnamed officer is reportedly in stable condition, according to the sheriff’s office.

LCSO is taking the lead on the investigation. No additional information was immediately available for release.