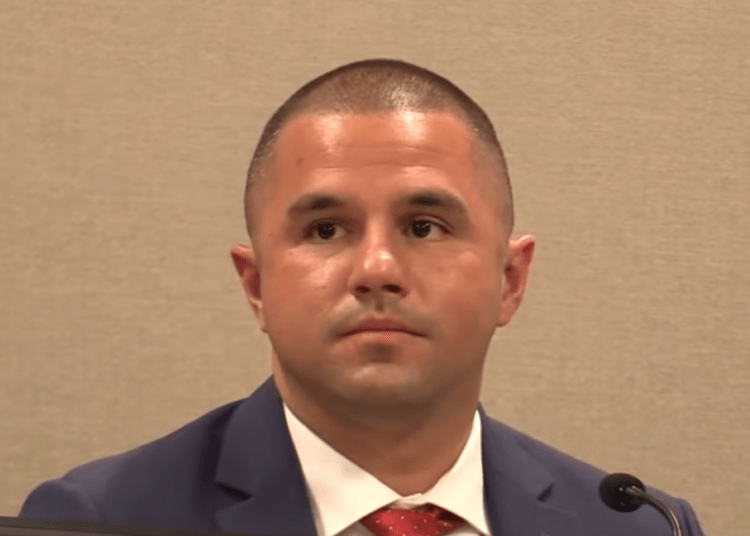 COLUMBIA, S.C. – A jury has found a fired South Carolina police officer not guilty of assaulting a black man during a narcotic investigation.

Former Rock Hill police investigator Jonathan Moreno was acquitted by the jury Wednesday of the misdemeanor assault and battery charge against Travis Price during a June 2021 traffic stop. The trial lasted three days followed by a single day of jury deliberations, AOL.com reported.

A cellphone video of the arrest posted to Facebook inflamed racial tension in the area. The video showed Moreno, who is Hispanic, and other officers wrestling with Price and his brother and forcing them to the ground. Afterward, there were several days of protests at the police station, according to the Associated Press.

The protests turned into riots as BLM members attacked the police agency by setting fires. At one point, a woman on a megaphone could heard instructing rioters to block the road if firefighters arrived, Law Officer reported at the time.

BLM rioters gathered outside the @rockhillpd building in South Carolina & carried out an arson attack. A woman on a loud speaker told people to block street if firefighters responded. BLM mobilized after police arrested an alleged drug dealer. pic.twitter.com/EHyrtUo0cD

Two weeks after the arrest, police officials held a news conference to absolve Price of wrongdoing and announce they were terminating Moreno from the department and charging him with a crime.

During the trial, Moreno, 35, and his attorneys insisted the veteran investigator was just doing his job when outside the gas station where police were arresting Price’s brother during a narcotic operation.

During Tuesday’s cross-examination, the former cop accused law enforcement officials and prosecutors of scapegoating him in a public relations move.

“You put me on a press conference and made me out to be a person that I’m not,” Moreno told 16th Circuit Solicitor Kevin Brackett.

Nevertheless, Brackett maintained that Moreno used excessive force by pushing Price into the ground and failed to de-escalate the tense situation.

Price said he was headed home when he saw police taking his brother into custody. He stopped and asked permission to take his brother’s jewelry and sunglasses.

“That day, I was roughhoused and treated unfairly for no reason,” Price testified Monday.

However, Moreno’s attorneys argued context was important, saying the investigator was in a “high crime” area and had just confiscated a firearm and drugs from the brother’s vehicle. Moreover, they said Price’s brother recently out on bond and had a criminal record, was resisting arrest and helped create a scene of chaos to which Moreno reacted.

Moreno testified that he was merely trying to maintain control of the scene. He said some of the physical force and shouting he directed at Price was to try to ensure the physically smaller officer had control of the larger man, AOL.com reported.

After Moreno was found not guilty, he told reporters that he was not sure if he would return to policing and acknowledged the high-profile incident had divided the community.

“I believe one day Travis and I can come together,” the former officer said.

Of the six jurors, there was one man and five women, one of whom was black.

Price’s attorney, Justin Bamberg, said his client was disappointed by the verdict but respected the jury process.

“Given the high-profile nature of this incident, we can only imagine what might happen on a day-to-day basis with the Rock Hill Police Department regarding the truthfulness of their reports and record keeping,” Bamberg said. “Our concern is that other citizens don’t suffer the same mistreatment that Travis Price endured.”