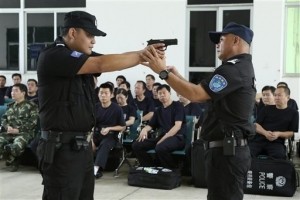 BEIJING (AP) — A string of shooting incidents involving Chinese police — leaving at least four people dead — has the public wondering if its rank-and-file police force is really ready to carry guns, as mandated by new regulations.

Last month, two policemen brought a loaded gun to a kindergarten show-and-tell. The handgun mistakenly went off, injuring four parents and one child.

The next day, an officer responded to a village quarrel and fatally shot a man in murky circumstances.

Police also fired repeatedly at a knife-wielding man driving a truck, killing him — even though witnesses said he posed no real threat.

The incidents — which have generated widespread media coverage and social media buzz — come after authorities decided in April to issue guns to patrolling officers to better protect the public and improve police response to crime and attacks.

The trigger seems to have been a brazen attack by a group of assailants who stabbed 29 people to death and wounded 140 others in train station in the southern province of Yunnan. Officials blamed the attack on extremists from the western Xinjiang region.

For decades, Chinese police were unarmed because the country has very little gun violence and firearms are hard to obtain. The change leaves Britain, Norway and New Zealand among developed countries where patrolling police officers generally aren't armed.

"Broadening the right (to carry guns) to more police officers could bring more harm than good if they do not follow the laws," said Liu Zhirong, an independent scholar who was once a researcher at an elite Chinese military police academy. "Police must learn to minimize use of force."

The Public Security Ministry has the daunting task of training hundreds of thousands of local police on how to handle a deadly weapon in the line of duty. The Chinese police force is 1.7-million strong, and it isn't clear how many will be armed. In Shanghai, about 1,000 of its 40,000 police began carrying standard-issue revolvers during routine patrols in April.

Experts worry, however, that the training will focus too much on technical aspects such as firing accuracy and not enough on psychological and legal aspects such as when to draw the gun and how to quickly size up chaotic situations.

"I even wonder if some police officers have ever seen a gun," said Hong Daode, a professor of criminal law at China University of Political Science and Law. "We are basically starting from zero."

Before they can take aim at a suspect, police are required by law to identify themselves, issue verbal warnings and shoot into the air. If they do fire at a person, they are supposed to aim for non-vital body parts.

The ministry has rolled out training sessions on firearms, and promises to eventually send 10,000 trainers across the country with each county-level region getting three trainers on average, the official Xinhua News agency said. Police Ministry officials did not respond to requests to be interviewed.

At a recent gun training session for 70 Beijing officers, the Beijing Youth newspaper said the primary goal was rapid firing. Officers were required to fire off six bullets within three seconds.

"We stress rapid firing, as an officer must draw the gun and shoot the first bullet within 1.2 seconds, and the officer must hit the target with the first shot," a trainer identified by his family name Shao told Beijing Youth.

A police officer quoted in the local newspaper Hua Shang Bao, and identified only with an alias, said he received minimal gun training at a police academy four years ago, and that he held a handgun for the first time since then in March. He was given a gun, five bullets and a license and told to study rules after answering a few basic questions and filling out a form, he said.

Military police, who receive gun training and are sometimes mobilized to provide security at public events, are typically given orders to shoot by senior officers, said Hong, the criminal law professor. But regular police officers are often alone or with just one partner and need to make split-second decisions, which increases the chances of gun-related accidents, he said.

The case of the gun going off in the kindergarten in the central city of Zhengzhou alarmed the public. The gun fired into the cement floor, scattering fragments that injured the five people.

"If the police cannot do their own work, how can they guarantee safety for members of the public?" Wu Yufan, a resident, wrote on his microblog.

There have been conflicting accounts about some of the gun-related deaths so far.

In one, a policeman responding to a village squabble in Yunnan fired his gun in the air as a warning, and it later misfired and killed one man — at least according to the official version. But witnesses told local media that the officer pushed the villager to the ground before shooting him in the chest.

In another, authorities said police acted correctly when they fired 12 shots to kill a man in a truck who was threatening people with a knife. But more than 100 witnesses also signed a petition testifying that the man posed no threat and the gunshots were unnecessary.

"Carrying a gun is a double-edge sword," Hong said. "To use it well can truly protect the public, but it is also highly dangerous when it is not done properly."