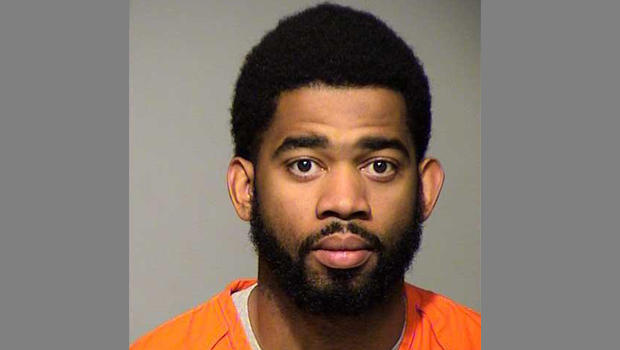 After months of investigation, Heaggan-Brown was charged Wednesday with two counts of second-degree sexual assault and two counts of prostitution, authorities said.

A criminal complaint accuses him of bragging that he was untouchable, trying to cover up allegedly raping a hopelessly drunk man, propositioning to pay for sex with two other people, and possessing lurid videos and images of other alleged sex acts on his phone.

“Its all-together awful. The fact is this individual has revealed his character [in ways] that did not come to light during the hiring process,” Police Chief Edward Flynn said during a news conference.

Heaggan-Brown sexually assaulted an unidentified man after a night of drinking at a bar, according to a criminal complaint. The two had been watching coverage of the violent protests that rocked Milwaukee in the days after the shooting.

The two men apparently met over Facebook. While at the bar, the complaint alleges that Heaggan- Brown “bragged about being able to do whatever the defendant wanted without repercussions.”

He also asserted that he had “no limitations,” the complaint maintains.

The man claimed that Heaggan-Brown sexually assaulted him at his house and then took him to a hospital. According to the complaint, Heaggan-Brown spoke to a nurse and told her that the man “began to act weird and unresponsive” while at the bar.

He also told a hospital security guard that the man was “completely out, zonked out of his gourd” after all the drinking, the complaint claims.

The man later told hospital workers that Heaggan-Brown had raped him.

According to the complaint, Heaggan-Brown texted a sergeant who was close to him the same morning, asking for help with a “situation.”

“Need your help big time. F—— up big time … But need to handle this the most secret and right way possible,” the text read.

Heaggan-Brown maintained the sex had been consensual when he talked about it with the sergeant, the complaint reads. He also said that the man in question “was drunk and had ‘medical issues.’”

When police began to investigate the sexual assault allegations, they had Heaggan-Brown turn over his phone. The phone showed that Heaggan-Brown had propositioned two other people for sex and also contained photos and videos of other alleged sexual meetings, the complaint alleges.

“These are charges that go to the heart of our code of conduct and oath to protect and serve” Flynn continued. “This is more than a little distressing.”
Read More

Share and speak up for justice, law & order...
Tags: InvestigationsmilwaukeeNewsraperiots