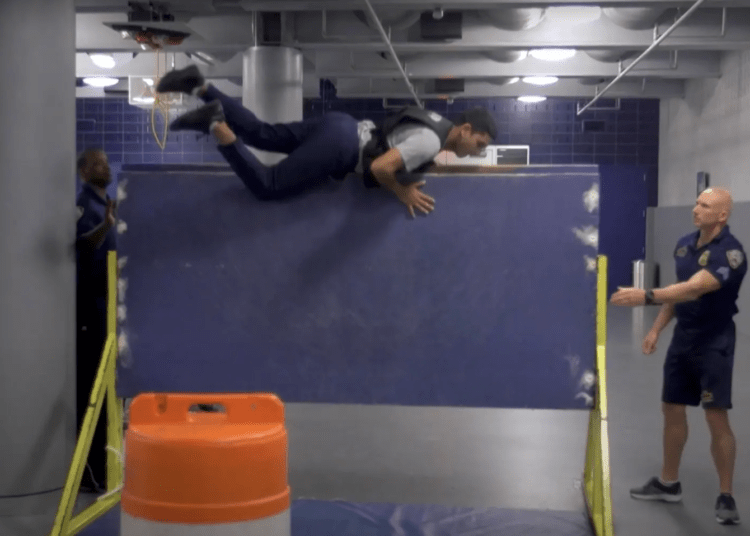 Prospective officers previously had to scale a 6-foot wall as part of their physical fitness test. (NYPD)

NEW YORK – The New York Police Department relaxed fitness requirements to become a city police officer amid a record wave of retirements that has the upper echelon desperate for warm bodies to fill the ranks, according to the New York Post. The agency suffered another huge hit in June, as 523 police officers departed, 400 from retirement, Law Officer reported.

The physical fitness qualification was relaxed as the department replaced a faux 6-foot wall at the Police Academy gym with a chain-link fence that’s easier to scale and extended the qualifying time for the fitness challenge by a full minute, according to official recruiting videos posted online.

The 6-foot wall change came after a cellphone was used last year to record a series of out-of-shape, wannabe cops unsuccessfully trying to get up and over the barrier. The repeated failures proved comical as the video made the rounds.

The “Barrier Surmount” is one of six tasks that comprise a physical exam known as the “Job Standard Test” that requires successful completion before moving on in the hiring process.

Moreover, to increase the passing rate, the 3-minute, 28-second time limit that was in place in 2019 was extended by a full minute — to 4:28 — last year, according to the NYPD recruiting videos posted on YouTube.

One displeased officer said “it’s really not hard” to pass the fitness test, which includes repeatedly running up and down a six-step staircase and using a weight machine that’s supposed to mimic struggling with an offender.

“If you can’t pass the basic requirements for being a police officer, you shouldn’t be one,” said the law enforcement veteran.

Furthermore, NYPD appears to have scrapped a requirement that recruits run 1.5 miles in 14:21 or less to graduate from the academy, the Post reported.

That qualification is posted on an official web page that features the 2019 video detailing the JST, but it’s not part of another that features last year’s video, according to the news outlet.

Sources said the 1.5-mile run hasn’t been officially eliminated but that top brass were considering scrapping it, with one saying, “So many people are retiring in droves and they have to fill these positions.”

Departures can be blamed on a variety of factors, including anti-police hostility, bail reform, rising crime and the implementation of the city’s punitive vaccination fiasco, according to officers.

Consequently, rank and file NYPD members are rushing to the exits like a “stampede,” said Police Benevolent Association President Patrick Lynch. They are looking to greener pastures by taking other civil service tests and heading to police departments, such as on Long Island, or the Port Authority, MTA and out of state, like Florida, Texas and Arizona.

Meanwhile, the NYPD academy class that graduated on Friday comprised just 561 new officers, a little more than half the 1,009 that sources have said the NYPD was hoping to hire, the Post reported.

The city began taking applications for the NYPD written exam on June 8. The deadline to sign up is July 15, with testing scheduled to start on Aug. 12.

A department spokesperson issued a statement on Tuesday, saying, “Our physical fitness requirements in the Police Academy have been reviewed and approved by [the] New York State Division of Criminal Justice Service and the NYPD will continue to abide by any guidelines issued by the state.”