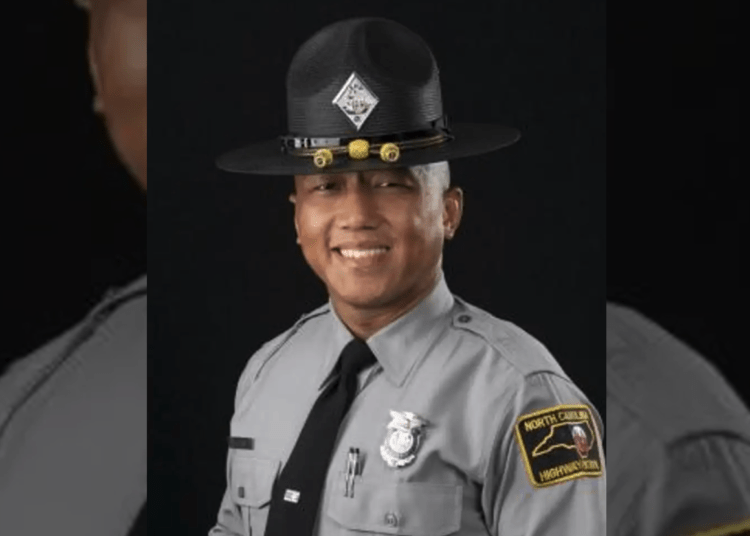 WAKE COUNTY, N.C. – A trooper with the North Carolina State Highway Patrol is being credited with saving lives by putting his own safety in peril to stop a suspected drunk driver from entering an interstate while traveling in the wrong direction.

Trooper Cody Thao used his own patrol unit as a barrier to stop the wrong way driver who was speeding up an exit ramp, according to the North Carolina Highway Patrol.

Law enforcement officials said Thao was called to assist with a pursuit in the early morning hours of April 8. Just as he arrived, the chase transitioned onto the I-40 eastbound ramp to Rock Quarry Road in Wake County.

Thao saw the suspect vehicle traveling in the wrong direction on the ramp, which could have led to a catastrophe.

The video shows Thao intentionally drive his own patrol vehicle into the path of the suspected impaired driver. The movement stopped the motorist from entering the interstate going the wrong way.

Fortunately, Thao was not injured in the blocking movement.

“I could not be prouder of Trp. Thao and his quick decision to stop the wrong way driver, his actions most undoubtedly saved lives,” Colonel Freddy L. Johnson, Jr., commander of the North Carolina State Highway Patrol, said in a statement. “His willingness to put himself in harm’s way is representative of the lifesaving work our members do each day. Placing others before ourselves is not just a saying amongst the law enforcement profession, it’s a reality of what we do for the betterment of the communities we serve.”

Joshua Ray Bibey, 26, was identified as the wrong way driver. An investigation revealed he was operating a motor vehicle while impaired. Therefore, he was arrested and charged with DUI.

Thao said he didn’t give consideration to being seriously injured until afterward, Fox reported.

“Once I saw the vehicle, I just decided to stop the chase right there,” Thao expressed. “This is what we signed up to do, this is what we agreed to do.”

He added, “All the credit goes out to the other troopers who inspire me on a daily basis especially here in Wake County.”

Thao is in his first year as a trooper with the North Carolina State Highway Patrol.

“Before that, I actually worked at a Tractor Supply,” he said. “I don’t have any prior experience with law enforcement. I’ve always had a servant’s heart, and I’ve always wanted to help people.”