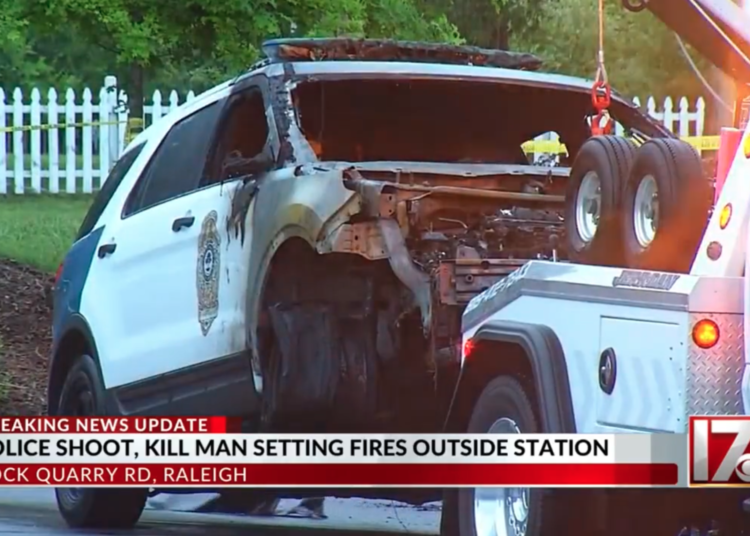 The incident began around 1:20 p.m. at the Raleigh Police Department Southeast District Office at 2800 Rock Quarry Road. Officials said at a press conference that a suspect began lighting cars on fire in the police parking lot with the incendiary devices before turning his attack toward officers. As a result of the man’s actions, a fatal shooting occurred.

Police had the area closed for hours due to the investigation, FOX 8 in Greensboro reported. Officials did not not disclose the identity of the deceased suspect.

Hence, the officer sought assistance from additional officers who arrived in the parking lot. Police instructed the man to stop throwing the incendiary weapons, but he was non-compliant, Patterson said.

The suspect continued to throw Molotov cocktails in the parking lot and two Raleigh police vehicles became engulfed in flames.

Once the suspect was neutralized, officers moved him away from a burning vehicle and provided emergency medical aid.

The suspect was subsequently transported to a local hospital where he was pronounced dead, according to the chief.

Patterson said the officers who fired their weapons were equipped with body cameras at the time of the shooting. Moreover, cameras outside the police station were also active. She plans to petition a judge to have the video released.

The Raleigh Fire Department responded to the scene and extinguished a vehicle fire in the aftermath of the shooting, FOX 8 reported.

Patterson said details of the police investigation will go to the Wake County district attorney.