The inability to hire cops has officials and residents concerned 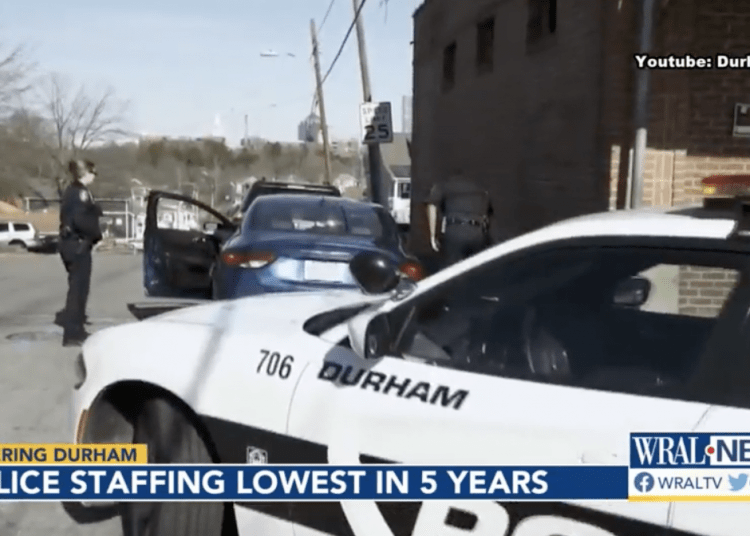 DURHAM, N.C. — The number of open positions for sworn officers in the Durham Police Department has hit a five-year high, forcing officers to work overtime to fill in the gaps. The unfilled vacancies have city officials and residents concerned, WRAL reported.

Police Chief C.J. Davis told the Durham City Council on Thursday that 74 of the 556 sworn officer positions – 13 percent of the police department – are vacant. The department needs about 62 police officers working every shift, but it can fill only 45 to 50. Officers are pulled in on their days off to make up for the shortfall, she said.

“No police department should operate on overtime … but that’s just the norm for us right now,” the chief said.

Davis blamed the coronavirus pandemic, which has halted the department’s in-person recruiting efforts. But police union spokesman Larry Smith said the recruiting woes reflect a lack of support for officers among Durham’s leaders.

“Policing in general, right now, is not an attractive place to be. We clearly know what’s going on around the country, all the anti-police rhetoric,” said Smith, a retired deputy police chief. “In Durham, in particular, you’ve got some – many of the officers don’t feel like they’re supported by city government.”

Smith pointed to the street outside police headquarters, where “Defund” has been painted on the pavement for months and the city has made no attempt to remove it. 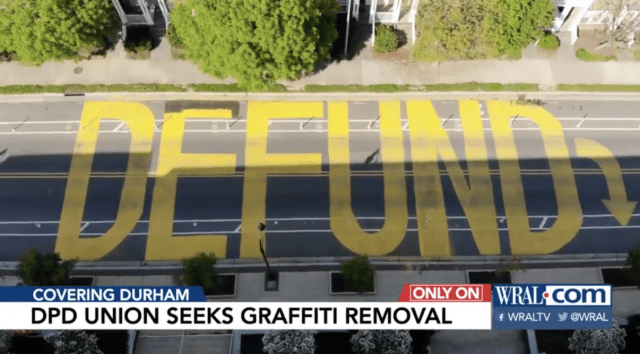 Davis has done everything she can for the department, he said, but she needs the support of the City Council to fill the vacancies, WRAL reported.

The council removed extra officers Davis sought from Durham’s proposed 2019-20 budget. During debate on the 2020-21 city budget, which occurred in the wake of George Floyd’s death in police custody in Minnesota, some council members discussed the topic of defunding the department.

“As I talk to many of the officers who have left and I ask them why, pay is part of it, it sure is, but the biggest thing is they just don’t feel like they would be supported in this government, in this police department, by this city if something happens, even if they’re right,” Smith said.

Working a large volume of overtime has a negative impact on officers and their ability to respond to calls for service, according to Davis and Smith.

“It’s sort of like burning the candle from both ends,” Davis said. “You want officers to be in the best physical health and mental and emotional [health] that they can possibly be when they respond to different kinds of calls. This is some very demanding work.”

“When you have that type of vacancy, it’s going to affect everything from, if you call 911, response times, how quickly will you get an officer there, to [case] clearance rates,” Smith said. “We have vacancies in the investigations bureau, so it’s going to affect all those things. It has a trickle-down effect.”

Tammie Goodman, whose son has been missing for more than three years and is believed to have been killed, said she believes more officers would help solve her son’s case.

Steve Wallace agrees that more police officers are needed, noting that a number crimes from construction sites he works on remain unsolved. But like Goodman, he said he understands why there are vacancies, WRAL reported.

“I wouldn’t want to be a police officer, not with the situation going on now,” Wallace said. “That’s a very dangerous job, very low pay.”

Regardless of danger and pay, law enforcement is a rewarding profession. But when police work is impugned and degraded, applicants will be few, as the Durham Police Department is experiencing.