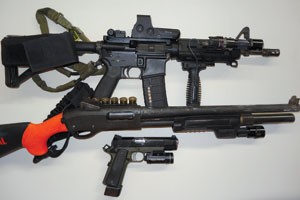 What do you consider the most important weapon accessory? After pondering items such as optics, lasers, grips, stocks and slings, I would have to say that the single most important accessory is the addition of a light. Applicable to both handguns and shoulder weapons, a quality gun-mounted light has the ability to aid in making a potentially life-changing decision: whether or not to use deadly force.

In the past, weapon-mounted lights were generally relegated to use by SWAT team members. This old-school logic has fortunately changed. I believe most U.S. law enforcement agencies now provide weapon-mounted lights, at least on handguns. My own agency issues the SIG P226 R .40 caliber handgun with a Streamlight TLR1 light. A Safariland holster that accommodates the combination is also issued. Officers electing to carry their own sidearm (from a list of approved .40 and .45 platforms) are encouraged to carry a light on their personal weapon. From a risk management perspective, the investment in a light just makes sense. Officers must identify a threat in order to make a proper use-of-force decision. In order to identify the threat, they must be able to see the suspect and what they have (or don’t have) in their hands or immediate access. According to the FBI’s LEOKA study, most lethal force encounters occur in low-light settings.

Weapon-mounted lights have come a long way since the early days of using a hose clamp to attach a large (and heavy) Mag-Lite to a shoulder weapon. The most well-known and early pioneer of weapon lights is SureFire. Their research and development of illumination technology set a benchmark for the lumen, a measurement of brightness that continues to be used today. SureFire was the first to combine the use of aircraft-grade aluminum bodies in a lightweight and compact package for both handguns and the widely popular H&K MP5 SMGs, which were the standard of both military and law enforcement special operations teams.

Today there are myriad options for weapon-mounted lights. Dozens of manufacturers offer a variety of activation switches, housings, mounts, brightness and strobe capabilities, both visible white light and invisible (to the naked eye) infrared light and battery choices. Test several models and compare prices and warranties before making a purchase.

Something to consider when contemplating which light to purchase for a handgun is the additional acquisition of a holster that will accommodate the gun with the light attached. A few years ago I was given a very nice Xiphos light made by Blackhawk. The light was extremely bright, lightweight and durable. The only downside was that its proprietary offset mounting design necessitated the use of a Blackhawk Serpa holster. Although I am a fan of the Serpa holster (and pretty much all things Blackhawk, given their exceptional quality), being relegated to just one choice is generally not preferable.

Probably the most popular power source is the CR123 lithium ion battery. It is reliable and produces a good deal of energy in a small and lightweight package. The shelf life is almost 10 years, which is a nice benefit. The only downside to this battery is that it is more expensive than others and once it starts to lose energy it quickly dies. That said, I prefer this to all other batteries. I personally shy away from any type of rechargeable battery for a weapon-mounted light if for no other reason than the hassle of removing the batteries for recharging (although I’ve also found them to be substantially less reliable in the smaller cells as opposed to a handheld light such as a Pelican 8060 or similar).

Don’t forget that training is just as important as having the right equipment. Why is training with a light important? All training (especially when the topic revolves around employment of deadly force) is important. Consider this: There has been at least one shooting by a member of U.S. law enforcement in which the officer stated that they had intended to utilize their weapon-mounted light to illuminate the suspect but that they had “accidentally shot the person” instead. This extreme example demonstrates why training is necessary. Lesser reasons include knowing not only how to activate/deactivate the light, but also when to tactically do so.

Proper selection of equipment (whether purchased by the agency or individual officer) supported by realistic, ongoing training will enhance officer safety and reduce liability. The addition of a light to a weapon platform (including less lethal impact munitions launchers) could easily result in the saving of a life (the officer’s or an unarmed suspect who might otherwise be shot). For these reasons, I believe the light to be the most important weapon accessory. Practice well and often, stay safe and have fun.