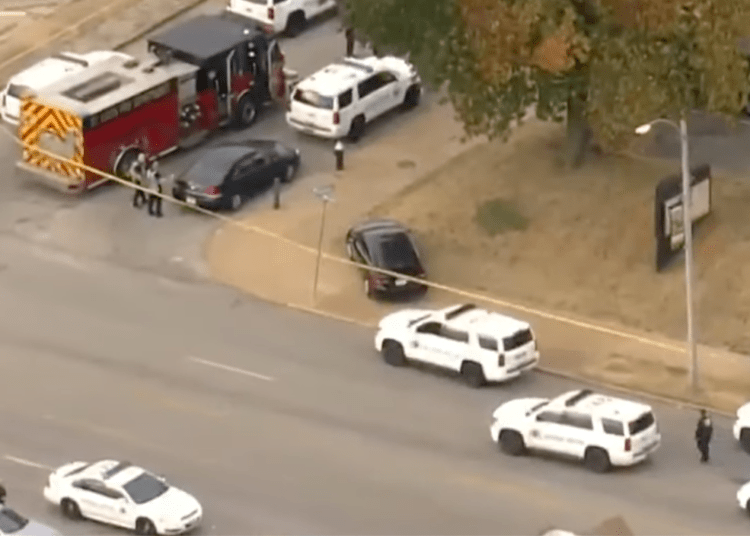 UPDATE: The suspect was identified Monday evening as Orlando Harris, 19, of St. Louis. He graduated last year from the school, which is located 3125 South Kingshighway.

Officials have yet to disclose the names of the woman and the teenage girl who were murdered. But relatives of the woman identified her to the St. Louis Post-Dispatch as Jean Kuczka, 61, who taught health and physical education.

Four other students suffered gunshot wounds. Two were shot in the leg, one in the arm, and one in the hands and jaw. Moreover, two additional students sustained abrasions, and one girl fractured her ankle.

“This could have been much worse,” Sack said, as the suspect had a dozen 30-round magazines.

The call for an active shooter went out at 9:11 a.m., and the suspect was down 14 minutes later. According to Sack, a security officer saw the man trying to enter the building, and police were summoned.

ST. LOUIS – At least three people are dead — including the gunman — and six others are injured at a high school shooting in St. Louis, Missouri, Monday morning.

The suspect reportedly shouted, “You’re all going to die!” as he opened fire on campus, authorities and witnesses disclosed.

The unnamed gunman was described as a male in his 20s. He was fatally shot inside Central Visual & Performing Arts High School, part of the St. Louis Public Schools, the St. Louis Post Dispatch reported. The news outlet did not immediately report further details as to how the suspect was neutralized.

A teen girl was pronounced dead inside the school, and a woman died after being transported to the hospital, both of gunshot wounds. Other victims suffering Injuries ranged from gunshot wounds to cardiac arrest, according to the news outlet.

Shots rang out a little after 9 a.m. on the campus. Police officers were seen helping the fleeing students scale fences and buildings. Not long after all students were being evacuated with hands in the air, Fox 2 Now reported.

David Williams, a math teacher at the school, told the Post Dispatch that the principal came over the loudspeaker and used the code word that indicates a shooter is in the building.

Williams said he heard gunfire outside his classroom, where one of the windows on the door was shot out. He also heard a man saying, “You are all going to (expletive) die.”

Taniya Lumpkin is a senior at the high school. She was in speech and debate class when a staff member told them to lock the door, but they “didn’t know if it was real or not.”

“Next thing you know, we just heard gunshots,” Nylah said. “First single shots rang out, then multiple, then single again.”

Teacher Michael De Filippo told the paper: “Once you heard the boom, all the chuckling and laughing in the back of the room stopped.”

Taniya Gholston, 16, said the gunman’s weapon jammed and that she heard him say something the the effect of “tired of this damn school,” the Post Dispatch reported.

The New York Post reported that parents were instructed to go to Gateway STEM at 5191 McRee Ave. to reunite with their kids.