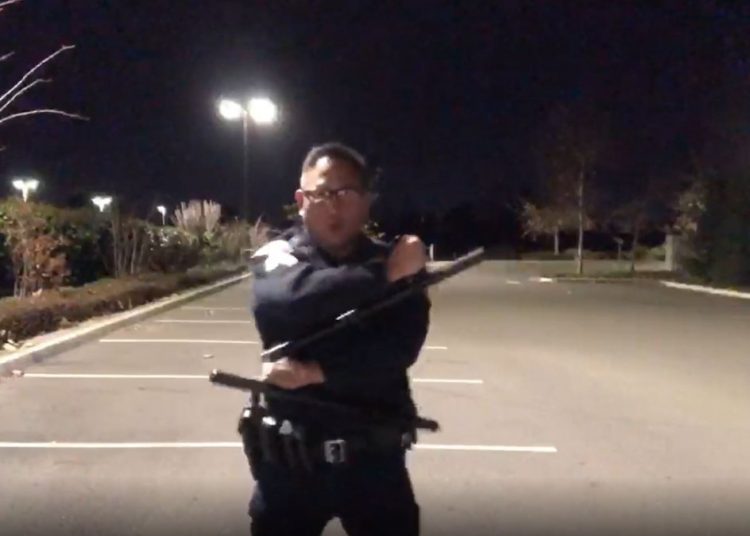 San Jose, Calif. — When San Jose Sergeant Eddie Chan filmed a video of him alone swinging his batons (tonfas) to the theme from “Mortal Combat”, he probably thought what every sane person would think: this is fun and kind of funny. But Chan made a grave error that so many have made in these modern progressive times. He seems to have forgotten how the world is full of idiots.

In the video, Chan performs a series of martial arts moves with two police batons in full uniform set to a song titled “Mortal Kombat.” Chan is now being investigated by the department’s internal affairs office. Because obviously, this is a serious matter that demands serious investigation.

ONLY ON @nbcbayarea:
This selfie video landed @SanJosePD Sgt. Eddie Chan in the Internal Affairs Dept.
Tonight at 6, what Chan’s former supervisor said publicly, and what his comrades are saying privately. More from the video at 6 #MortalKombat pic.twitter.com/WFwjYQurn0

Retired San Jose Lieutenant Rob Millard was a former supervisor to Chan. Millard boasts he formerly taught defensive tactics to police officers and that that the moves displayed in Chan’s video were never in his lesson plan, as reported by NBC Bay Area.

Every cop reading this knows that any Lieutenant teaching defensive tactics (especially those in a retirement chair) would break their arms doing what Chan did.

And if we are being serious, Chan didn’t indicate it was part of a lesson, so maybe we should leave the gas lighting to the professional agitators.

Of course, nothing can ever happen without the NAACP chiming in because it must be forbidden to talk about real issues that could actually make a difference in the black community. Reverend Jethro Moore told NBC Bay Area “That’s nothing we need to see from police,” and he is concerned about the message the video sends.

“I feel it’s a bad place to be if he feels like he’s going into work to be in combat with someone.”

All joking aside, Chan may have made one grave error. Rather than pouring water on himself as a department sanctioned “challenge” or “lip syncing” video of “Baby One More Time,” he was having fun. And reading into the video beyond that—and beyond Chans’s amusement and jest—says more about the critic than the content.

Unfortunately, in these crazy times, it seems a guy named “Chan” has given a retired officer and a preacher to seriously offer their expert opinions and guidance.

Some may call Chan a fool. In others, he’s called a “legend.”