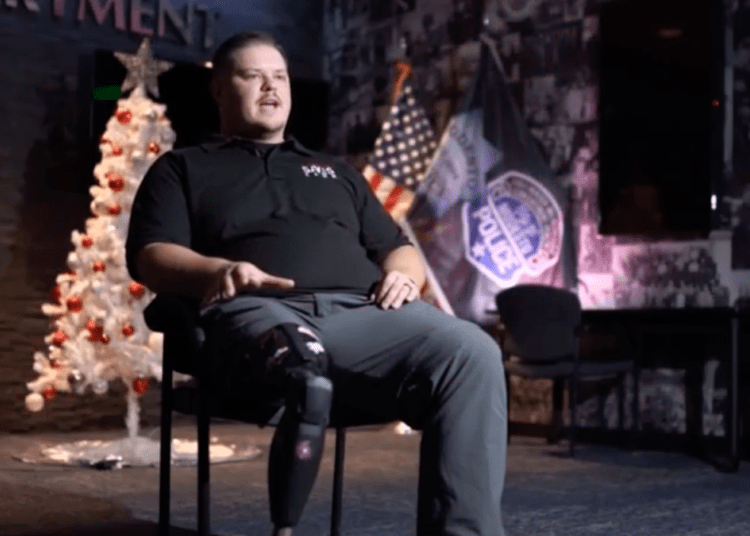 MODESTO, Calif. — A California police officer who faced death and survived, is back on the job performing the work he loves. Michael Rokaitis, a gang investigator with the Modesto Police Department, cherishes the chance to follow in his father’s footsteps of being a cop. Yet those steps in the real world have become more of a challenge after losing a leg and spending time in a coma following a shooting in 2021.

Rokaitis refers to the thrill of being a police officer to that of a “wild ride.” Yet it is a professional adventure that met opposing forces on August 14, 2021 in the form of gunfire when a pursuit ended in a shooting, KCRA reported.

“We heard a call that one of our officers in a short pursuit of a motorcycle and we started going that direction,” Rokaitis said.

The chase terminated in front of a residence in the 3100 block of East Orangeburg Avenue. The rider was taken into custody.

After finding narcotics on the motorcyclist, police obtained a search warrant for the home and entered shortly after 11:30 p.m., CBS News reported. Rokaitis and his partners went to clear the house. While doing so, they encountered gunfire.

“As we entered the last room the suspect began shooting at us,” he said. “I was struck once in the vest right on my chest and another right under my vest that ended up hitting an artery and we had to get me to the hospital pretty quickly.”

Other officers evacuated Rokaitis from the house and he was rushed to the hospital. Although he was seriously wounded, only one thing remained on his mind.

“My biggest memories were wanting to get home to my wife and my daughter and knowing that I had a job to do that,” he said.

However, doctors were not sure the officer was going to survive. Rokaitis had his right leg amputated and spent 14 days in a coma. He also went through nearly a dozen surgeries followed by 16 months of difficult rehab learning to walk again. Yet through it all,  Rokaitis returned to work last Monday.

Rokaitis walked through the doors of the police department to an ovation from his peers. It was the next step in his recovery. For now, he is restricted to desk duty, KCRA reported.

“The job is different now,” he said. “I don’t know what the future holds and if you asked me in December (2021) when I was still in a wheelchair if I’d be walking around and wearing a prosthetic all day I’d think that is crazy. I just keep thinking to challenge myself every day and every week to see how much more mobility I can get.”

The suspect accused of shooting Rokaitis was identified as 42-year-old Jesse James Brooks, ABC 10 previously reported. Following the shooting, Brooks was arrested and subsequently booked at the Stanislaus County Jail on three counts of attempted murder of a police officer and other weapons charges.