K9 Max was a German shepherd that began service with the St. Joseph Police Department in 2019 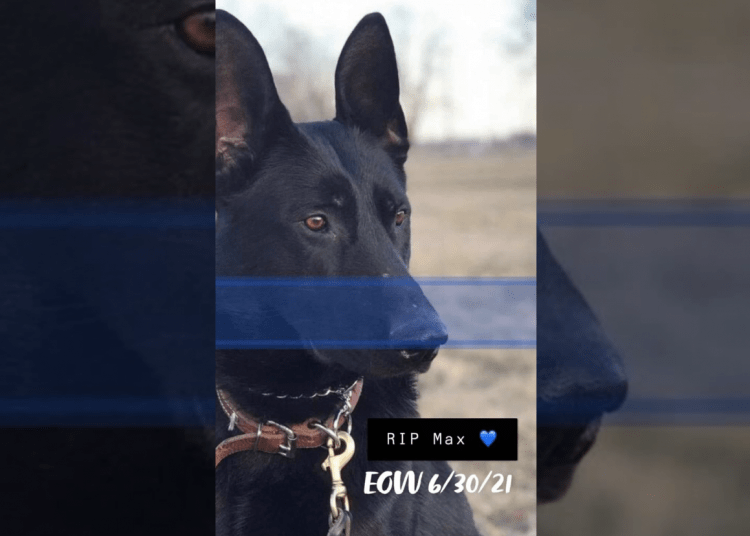 ST. JOSEPH, Mo. — A Missouri police K9 was shot and killed while officers were serving an arrest warrant, according to authorities.

K9 Max of the St. Joseph’s Police Department was fatally wounded by the wanted suspect who was fleeing from officers Wednesday night, the department said in a statement, the St. Joseph News-Press reported.

“Last night at approximately 10:30 p.m. members of the special response team along with other officers and our K-9 Max responded to 5108 Barbra St. in reference to serving an arrest warrant on an armed and barricaded subject. During the course of trying to negotiate the subject out of the house, he fled armed,” St. Joseph Police Commander David Hart said.

“Shortly thereafter the suspect fired at our police K-9 striking him. The subject was then taken into custody,” he said. “Unfortunately, the K-9 was rushed for medical treatment and succumbed to his wound.”

The suspect was identified as Valdez McDonald, 24. He was wanted on a felony charge related to domestic violence. Now he’s likely to face additional charges following the death of K9 Max.

A neighbor, Carol Hall, said she and her family heard the commotion and looked outside.

“We were all inside just 10:30 at night getting ready to go to bed and everything. We heard a loud bang and I figured it was just fireworks and [my husband] opens the door and goes ‘Honey that’s not fireworks,’” she said. “So we came out and just as I was poking my head out the door you could see the officer and Max walking through the yard trying to get to the cruiser.”

McDonald is accused of abusing his mother by hitting her in the head with multiple objects, according to a probable cause affidavit, St. Joseph News-Press reported. Furthermore, reports say he also pointed an AR-15 style rifle at her chest during the June 30 encounter.

“Max performed his duties heroically and protected the lives of others on scene,” police said in a statement, according to kansascity.com.

K9 Max was one of two police service dogs working for the department. The German shepherd from Slovakia was born on Sept. 9, 2017, according to the agency’s website. He became a member of the St. Joseph Police Department in February 2019. He was partnered with Officer Lucas Winder. Max was described as a “happy-go-lucky dog with a bark that makes you not want to ask about his bite.”