"This lawlessness cannot continue. We need help from the governor," one council member said. 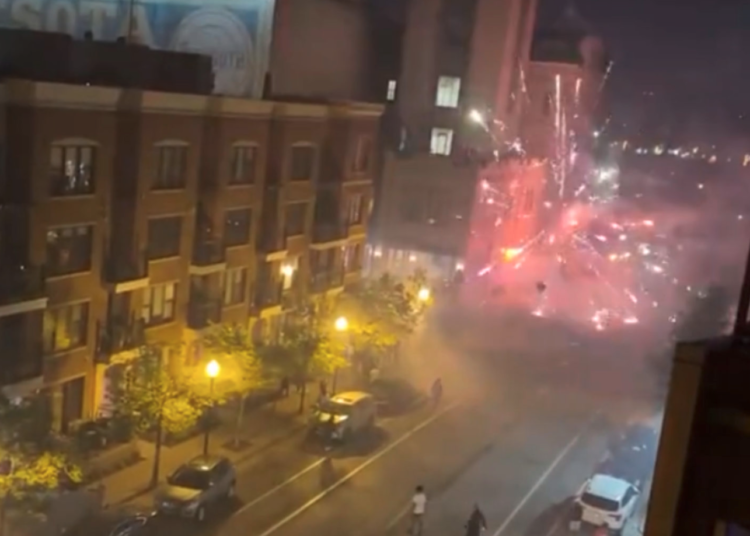 Fireworks are launched into an apartment building in downtown Minneapolis. (Crime Watch/Twitter)

MINNEAPOLIS – Fourth of July celebrations and gatherings turned into complete mayhem over the holiday weekend.

“Eight victims are hospitalized, several in critical condition. There was no formal July 4 event or fireworks in the park or on the river, but park visitors gathered on their own at Boom Island and other parks to celebrate the holiday,” said Dawn Sommers, Minneapolis Park and Recreation communications director.

Michael Rainville, a city council member who represents Ward 3, lives just a block from Boom Island. He said the chaos went on for hours Monday night and huge groups of young people were responsible. Rainville went for a walk around 10:30 p.m. to see the disorder for himself and saw ambulances and people in need of medical treatment.

The councilman said eight were shot in the Boom Island incident and two were taken to the hospital via ambulance. The other six were transported to the hospital with friends.

Police were assaulted with fireworks and other objects and often had no choice but to retreat, Rainville told Alpha News. He noted that Minneapolis is down more than 300 officers and “these people know that the police are outnumbered.”

“This lawlessness cannot continue. We need help from the governor. He has to bring in the National Guard to Minneapolis,” Rainville said. “I would like to ask Gov. Walz why he doesn’t care about public safety in Minneapolis. I wish he’d call me.”

Witnesses described the battleground to Crime Watch Minneapolis, saying people were “throwing mortars at cops and their cars and into the mill and main building. They tried to fight a guy who came downstairs after they shot a mortar into their balcony.”

Crime Watch also reported that about 25 people were shooting fireworks into the Mill District City Club apartment building while trying to break in.

911 caller says 25 people are shooting fireworks into the building and trying to break in.
225 Portland Ave
01:06

Multiple social media videos captured people setting off fireworks into downtown apartment buildings and at people on the streets.

.
Utter mayhem in #MplsDowntown.
Went on for HOURS without response. pic.twitter.com/To8xuvscH1

Another video captured a shootout in downtown Minneapolis.

Video of one of last night’s shootouts was captured.

This has gotten out of hand — It’s time for new leadership. We must restore the rule of law in Hennepin County. No more will we embolden the actions of violent criminals in our streets. pic.twitter.com/nObskZeYyI

No arrests have been made in the Boom Island shooting at this time.

Park Police are investigating and anyone with details on the shooting is encouraged to call 612-230-6550.