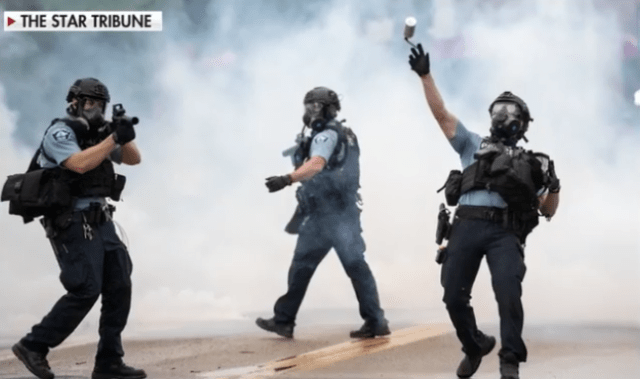 MINNEAPOLIS – Chaos broke out on Tuesday night in Minneapolis as protesters took to the streets to demand action after the death of George Floyd, a Minnesota man who died in police custody a day earlier.

Floyd, 46, died Monday night and video later emerged showing the man on the ground with a police officer pressing his knee against Floyd’s neck. Footage released of the incident showed Floyd shouting, “I cannot breathe” and “Don’t kill me.”

Officers had responded to a call from a grocery store that claimed Floyd had reportedly used a forged check. Preceding the take down was a struggle with police officers, which was not included in video footage posted to Facebook.

Shortly after the custodial death it was announced that the FBI and the Minnesota Bureau of Criminal Apprehension would conduct an investigation.

However, public pressure mounted and four officers were fired by the end of the day on Tuesday.

“We’re here to let them know this can’t be tolerated; there will be severe consequences if they continue to kill us. This will not go on another day,” a protester said, according to WCCO-TV.

The protests began on the south side of Minneapolis, close to where Floyd was arrested. Protesters were seen sitting in the crosswalks and using their own vehicles to block traffic. Organizers emphasized keeping this protest peaceful, but chaos began to swell during the day, Fox 9 Minneapolis reported.

Some carried signs reading “I can’t breathe” and “Jail killer KKKops,” according to the Guardian.

The long parade of protesters continues along 38th St (it's been about half hour of a steady stream of protesters past one intersection) carrying signs saying "Justice for George Floyd," "I can't breathe" and "Black Lives Matter." Follow @ChaoStrib for more. pic.twitter.com/hsc3t7WvDM

Protesters continued to block traffic during the evening. As the crowds grew, the American Civil Liberties Union of Minnesota reminded protesters to keep their distance to help stop the spread of COVID-19, WCCO reported.

The sounds of motorcycles revving were also captured on video as they sent crowds running during the protest, with many demonstrators confused as to what was happening, according to the station.

(Video taken at 5:45pm but wouldn't upload due to service issues).

Sound of motorcycles revving sends crowd at George Floyd protest running, many confused or scared by what's happening. Motorcyclists actually there in support of protest/march.@WCCO pic.twitter.com/yXJpKQqMS5

The protesters later moved toward the Minneapolis Police Department’s 3rd precinct, where crowds swelled. People were seen throwing rocks at the building, as well as at police cruisers — with one being sprayed with paint, according to FOX 9.

Protesters threw water and milk bottles at the officers, shouting “pigs” and “how could you,” the Guardian reported. Police used less lethal options to disperse the crowd approaching the station.

Police shooting more tear gas and marking rounds. Guy next to me got nailed w marker from across the street. Truck drove full speed into a bunch of carts and protestors rushed it. Vehicle drove off dragging a cart down Lake. More rain now and ppl dispersing pic.twitter.com/RdzZtJTBhj

As rains came down in the city, demonstrators were seen using carts at a Target store as cover before police launched tear gas, Fox News reported.

Floyd’s death has prompted comparisons to that of Eric Garner, an African-American man whose death was brought on by a chokehold during a 2014 interaction with NYPD officers.

The president of the Police Officers Federation of Minneapolis, Lt. Bob Kroll, said that the union intends to provide full support to the officers involved in the incident — who have yet to be identified by authorities.

“Now is not the time rush to judgment and immediately condemn our officers,” Kroll said, according to WCCO. “An in-depth investigation is underway. Our officers are fully cooperating. We must review all video. We must wait for the medical examiner’s report.”

Floyd was taken to Hennepin County Medical Center in Minneapolis where he died at 9:25 p.m. on Monday. The cause of his death is currently pending further testing and investigation, according to the medical examiner.