Amid attention and controversy, Minneapolis police union head Bob Kroll has no regrets 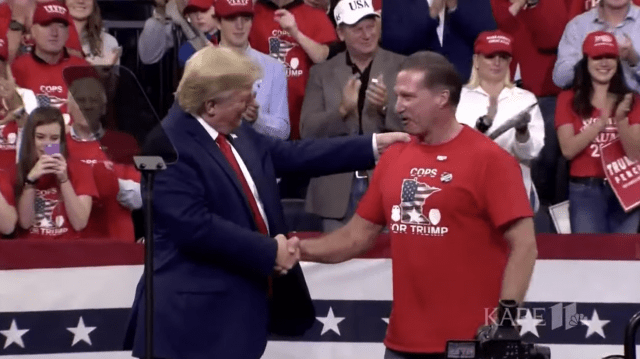 Despite attention and controversy, Bob Kroll is a courageous man with a mission. The following article about this noteworthy leader was originally published by the Star Tribune.

With President Donald Trump looking on, Lt. Bob Kroll, the frequently outspoken president of the Police Officers Federation of Minneapolis, stepped behind the lectern at the Target Center last month — and back into controversy’s spotlight.

Trump, in introducing Kroll, said that he had first seen “the great gentleman on television, pouring out his heart, pouring out his guts” while standing up to the city’s liberal establishment.

The sight of the elected union head, who represents the department’s 800-plus rank-and file officers, backslapping with the president onstage unleashed another torrent of public criticism of Kroll and rekindled questions for some about whether real reform will ever take root in the city’s police force.

Much like Trump, Kroll said that most of the criticism leveled at him was unjustified.

Trump’s embrace of Kroll seems to be part of a broader GOP strategy to make urban crime a campaign issue in 2020. Trump has lambasted cities like Baltimore and Atlanta, calling them “crime-infested,” and in Chicago last week for the International Association of Chiefs of Police conference, he railed against the city, saying it is “embarrassing to us as a nation” and that “Afghanistan is a safe place by comparison.”

The president’s support served to boost Kroll’s national profile and conservative credentials, according to Amy Koch, a former state Senate GOP leader turned political strategist. But, she added, the so-called “Trump effect” can “work both ways.”

“From an outside perspective, he’s definitely got some potential political momentum, depending on if he decided to exercise that,” said Koch. “But it also cuts the other way because in Minneapolis the constituency is definitely not pro-Trump.”

“It doesn’t help in terms of being comfortable calling upon the Minneapolis police for help if you feel they’re already hostile toward the community that you come from,” she said.

Like Trump, Kroll, who has been a police officer for 30 years, is no stranger to inflammatory statements. Four years ago, when the fatal police shooting of Jamar Clark resulted in weeks of protests, Kroll, already a lightning rod for criticism, drew the ire of activists by pointing out Clark’s “violent” criminal history in TV interviews, and later referring to Black Lives Matter as a “terrorist organization” after the officers involved were cleared of wrongdoing in separate local, state and federal inquiries.

But Kroll has remained defiant. He brushed off protesters’ claims that Clark’s death was proof of ingrained racism in the department, and he publicly defended the actions of the two officers, Dustin Schwarze and Mark Ringgenberg, before an investigation into the incident had been completed.

But Kroll’s supporters say he is being unfairly vilified for simply trying to do his job. Past and current colleagues describe him as principled and public-spirited; as the head of the domestic violence unit, they say he demanded that his detectives work harder to make arrests at a time when such cases were rarely taken seriously, and he has built good will within the department after years of representing officers in grievance and disciplinary hearings.

Greg Hestness, a former deputy police chief in Minneapolis who remembers Kroll as a hard-nosed street cop who once had a part of his ear bitten off during a bar fight while off-duty, said that the intense criticism of police coming from City Hall and beyond may be inadvertently strengthening his support among the rank-and-file, even among officers who don’t share his views.

“They’re feeling kind of beaten down and I think they appreciate kind of having a reliable voice of support,” Hestness said.

Kroll has long shown a willingness to tangle with the powers-that-be — from former-mayor Betsy Hodges to Hennepin County Attorney Mike Freeman — in the name of protecting officers’ rights. But while he was a constant thorn in the side of former police chief Janeé Harteau, Kroll has been uncharacteristically supportive of her successor, Medaria Arradondo, and, until recently, Mayor Jacob Frey, as the city wrestles with the question of whether to hire more cops. While Arradondo asked for 400 officers by 2025, Frey’s 2020 budget proposal requested 14 officers.

Days before the Trump rally, Kroll ended his monthslong silence on the subject with a barrage of cable TV news interviews, repeatedly blasting Frey for reportedly pursuing a policy that banned cops from wearing their uniforms off-duty at political events. In protest, the union began selling “Cops for Trump” T-shirts, which brought in close to $100,000 in sales in a matter of days, Kroll said.

“When I was silent in hopes that this would work and he put forth 14 names, 14 people after the chief laid out why we need 400, I was like the gloves are off: I’m done,” he said.

“If he was sincere about wanting to bring trust and support about a public safety … in Minneapolis, he should spend more time getting to know residents and less time getting publicity from Donald Trump,” Frey said.

Even before his tenure as union president, Kroll’s outspokenness sometimes landed him in hot water.

He came under fire after reportedly suggesting that then-U. S. Rep. Keith Ellison was a terrorist. Another time, he was suspended after being accused of using a homophobic slur about a gay aide to former Mayor R.T. Rybak. Both episodes, which Kroll continues to deny happened as reported, were cited in a 2007 federal lawsuit brought by five black officers, including Arradondo, as examples of institutional racism within the department’s ranks.

Like many cops, Kroll keeps his private life private, particularly his marriage to WCCO-TV reporter Liz Collin. He refused to discuss the subject — going as far as saying he’d no longer talk to the Star Tribune if it reported they were married. He said he was concerned it would negatively affect her career.

Kroll, 54, grew up on St. Paul’s East Side and says he always knew he wanted to be a cop. He joined the department in 1989 and was elected to his first two-year term as union president in 2015, handily defeating longtime incumbent John Delmonico. He next won in another landslide against acting Federation treasurer Cory Fitch before running unopposed in the most recent election this spring.

Police Chief of Staff Art Knight said Kroll represents an old-school, “broken windows” style of policing that believes in going after all lawbreakers, regardless of race.

“Some old-school cops, I call them ‘equal opportunists’ … it’s kind of like they become judge, jury and executioner — and we can’t have them,” said Knight, while adding that he also saw Kroll’s commitment to public service while serving under him in the department’s defunct public housing unit. “The majority of people we dealt with happened to be people of color, and I can tell you he gave them the best police service and made sure that his officers gave them the best police service.”

The coming weeks will show how, if at all, Kroll’s endorsement of Trump will affect the union’s negotiations on a new contract or ongoing city budget talks. Some black officers privately voiced frustration when Kroll joined Trump onstage shortly after the president’s controversial remarks on Somalis and immigration. Officials with the Somali American Police Association, which includes members of the Minneapolis police federation, declined to comment.

Kroll said that with the exception of one officer who e-mailed him, the response from colleagues and the public has been almost universally positive.

“So, if the membership would come and say, ‘Listen, back out of the politics, we don’t want any of it,’ I would do that, but all I’m getting is overwhelming support,” he said. “The reason that they’re talking to you, and not talking upstairs in our meeting hall, is that if you get one or two cops that say that, there’s gonna be 50 cops around them shouting them down, saying, ‘Hey, get outta here.’ ”

Libor Jany is the Minneapolis crime reporter for the Star Tribune. He joined the newspaper in 2013, after stints in newsrooms in Connecticut, New Jersey, California and Mississippi. He spent his first year working out of the paper’s Washington County bureau, focusing on transportation and education issues, before moving to the Dakota County team.