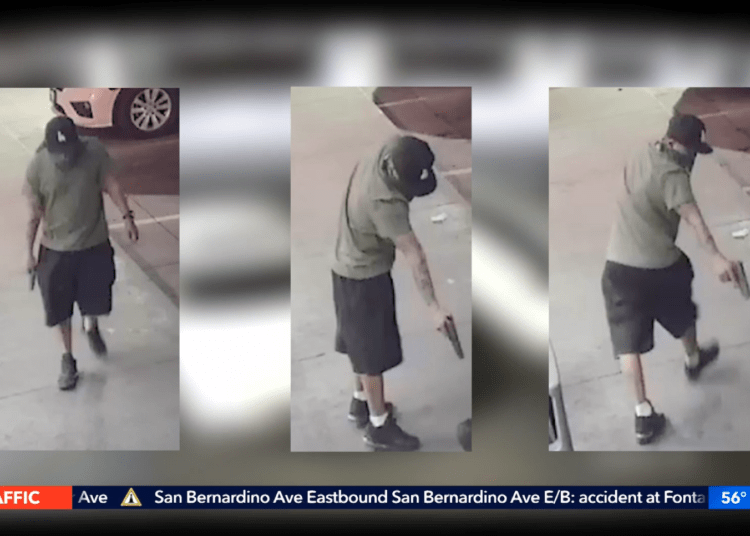 LANCASTER, Calif. – Detectives at the Los Angeles County Sheriff’s Department are seeking public assistance to find a ruthless gunman who shot another man in Lancaster, then chased the victim down and shot him again multiple times while he was calling 911, according to KTLA.

The suspect opened fire on an unsuspecting driver, identified as Jason Castillo, near the intersection of Challenger Way and Avenue K in the city of Lancaster during the early morning hours of Dec. 3, LASD Detective James Phillips said.

“We definitely believe, with the evidence we have, that during the shooting, they had actually crashed into each other. We are guessing that the suspect was ramming into the victim’s vehicle,” Phillips said.

Castillo was wounded in the initial attack and fled to a nearby gas station to call for help, according to LASD.

Nevertheless, the gunman was “driving around looking for the victim,” Phillips said, and once he found Castillo, the shooter carried out what Phillips called “a violent, brutal attack that seems unwarranted.”

The shooter pulled up to the gas station, exited his vehicle and opened fire on the helpless victim, surveillance video shows.

The suspect is described as a male, Hispanic, driving a white four-door BMW — possibly a 3 series with tinted windows and gray rims that likely has front-end damage due to the crash, KTLA reported.

Castillo is described as a family man with no criminal history, according to law enforcement authorities.

“Mr. Castillo was on the phone with 911 and was laying on the ground, explaining to the operator that he had been shot while driving. The suspect approached Mr. Castillo as he laid there and shot additional rounds into his head,” Phillips said.

Miraculously, Castillo survived the shooting. However, he remains in critical condition and is unable to speak, detectives said.

As a result, LASD is seeking information to help find the ruthless gunman.

“We definitely tried many avenues and now we are asking for the public’s help,” Phillips said.

A $20,000 reward has been offered for tips leading to the arrest and conviction of the suspect.

At the time of the shooting, the suspect was wearing a green t-shirt, black shorts, white socks and a black baseball hat.