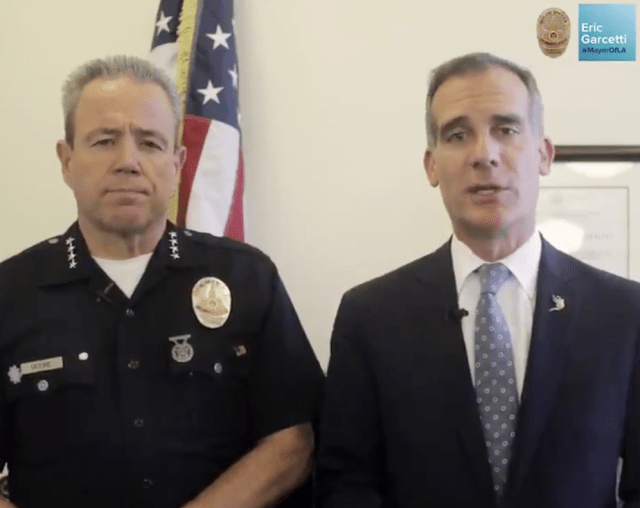 LOS ANGELES – Los Angeles Mayor Eric Garcetti released a Twitter video Saturday explaining why he and the city’s government won’t be cooperating with federal Immigration and Customs Enforcement (ICE) agents as they intend to find people violating federal law by remaining in the country illegally.

President Trump initially announced the roundup on illegal immigrants in June, before backing off to give Congress more time to find a bipartisan solution. Yet the federal agency has been given the green light this weekend. Moreover, a senior administration official told Fox News the crackdown was underway in New York City and several other places.

Garcetti, a Democrat, gave legal advice to those living in Los Angeles illegally. Furthermore, he informed them of which city—tax payer funded—resources they could take advantage of. One of these resources includes an attorney. “We’ve all heard reports the Trump administration is threatening to roundup and deport thousands of immigrant families in cities across America this weekend,” he began.

A message for all Angelenos: Here in Los Angeles, we will not be coordinating with ICE.

Your city is on your side, we are in this together → https://t.co/mHCFBjJ4vC pic.twitter.com/b3apkjzXms

“I want every Angeleno to know their rights and how to exercise them. Remember, you have the right to remain silent. You don’t have to open your door to an ICE agent that doesn’t have a warrant signed by a judge. You have the right to speak to a lawyer before signing any documents or speaking to law enforcement. And, if you need help finding an attorney, you can call 311 and learn more about our Justice Fund and other resources that offer legal support.”

Garcetti also told them to keep records of everything happening between them and federal law enforcement officers and recommended taking down names and badge numbers. He also proudly declared his city would not be assisting with the ICE raids, Fox News reported.

“Whenever possible, keep a record of everything that happens. Take note of an officer’s name and badge number, of when and where you are being questioned, so you can use that information in your own defense,” he said.

“And, most importantly I want you to know, you do not need to be afraid. Your city is on your side, and rest assured, here in Los Angeles we are not coordinating with ICE.”

Garcetti ceded time to Los Angeles Police Chief Michel Moore, who claimed local law enforcement was staying out of the raids on the basis of federalism. He said it’s the federal government’s job to deal with issues of immigration, while local police deal with safety.

“Our police force does not do the job of federal law enforcement, so I want to reiterate what the mayor just said. The Los Angeles Police Department is not assisting ICE in any way,” he said.

“We will not enforce immigration laws that are civil in nature and fall under the justification of the federal government. Immigration is a federal matter. Safety is a police matter, and we’re not going to mix those two.”

Before Garcetti signed off he said the issue of illegal immigration wasn’t political but simply was about being a “good neighbor.”

“In Los Angeles, we draw strength from the diverse dynamic communities that call our city home and we support immigrant families because they’re our friends, neighbors, colleagues, confidants, our fellow taxpayers, local business owners, and co-workers. For us, this isn’t partisan politics,” he said.

“It’s about being a good neighbor… and we will never let fear and intimidation win the day. We are in this together.”

Los Angeles was not the only Southern California city to undermine ICE efforts. Santa Ana issued the following information via press release on Friday:

While there are reports of ICE involved enforcement actions beginning Sunday, July 14, 2019, the Santa Ana Police Department is not aware of any intended ICE actions in Santa Ana.

So while the Trump administration makes an effort to curb problems created by illegal immigration, Democratic controlled municipalities continue to resist cooperation.