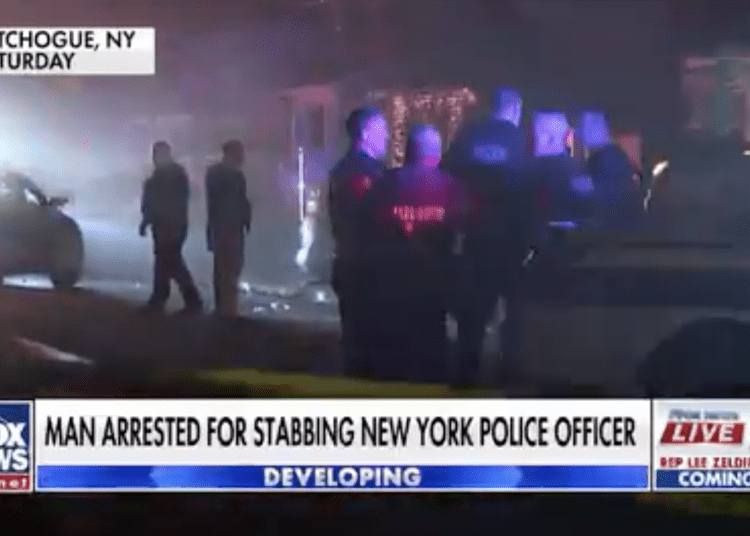 NEW YORK — The man accused of stabbing and critically injuring a Long Island, New York, police officer earlier this month while allegedly high on methamphetamine has been indicted on 10 charges in connection with the attack, county officials announced Wednesday, according to reports.

Jonathan Nunez, 25, was hit with four felony charges of aggravated assault on a police officer, first-degree assault, assault on a police officer, and two counts of assault, in addition to charges of resisting arrest, leaving the scene of an incident resulting in physical injury, reckless driving and operating a motor vehicle while impaired by a drug, Suffolk County District Attorney Timothy Sini announced.

Authorities said Nunez was driving a 1999 Mercedez-Benz in Patchogue, on Long Island, around 10:30 p.m. on April 10 when Suffolk County Police Officer Christopher Racioppo spotted him “driving erratically” and with no headlights on, FOX News reported.

As Racioppo turned on his emergency lights and tried to conduct a traffic stop, Nunez “allegedly fled at a high rate of speed and crashed into a 2004 Nissan at the intersection of South Ocean Avenue and Brook Street,” according to the DA’s office press statement.

The suspect ran from the scene to a nearby home and began fighting with Racioppo. That’s when, authorities said, he stabbed the officer in the leg and severed a vein and his femoral artery.

A pair of good Samaritans, reportedly a Marine and a retired New York City police officer, restrained Nunez and provided medical aid to the wounded officer, who was later transported to a local hospital in critical condition, Law Officer reported.

Racioppo was released from the hospital 16 days later, after at least one surgery for the ruptured artery. News12 Long Island cited an unnamed doctor in reporting the officer would have died if medical treatment had taken just 20 minutes longer.

“This defendant was allegedly high on drugs and driving erratically, and instead of pulling over and complying with lawful commands, he decided to speed through a residential area and ultimately attacked a police officer,” Sini said. “These are all conscious decisions that the defendant made – decisions that put so many people’s lives at risk – including Officer Racioppo, who is lucky to be alive thanks to the swift actions of the responding officers, good Samaritans and the medical professionals.”

“Jonathan Nunez is a criminal and an attempted cop-killer, whose actions nearly ended Officer Christopher Racioppo’s life causing immeasurable harm to him and his family.   Nunez deserves to be prosecuted to the fullest extent of the law. pic.twitter.com/1S1n18JNIw

Meanwhile, Nunez was taken to a nearby hospital for non-life-threatening injuries following the crash.

“The defendant was extremely combative and extremely violent,” Sini said. “At no point did he have any interest in complying with lawful commands by members of the police department, and that behavior continued when he was brought to the hospital, where he was combative with the medical staff as well.”

Nunez was on probation at the time of the attack, and needed to be sedated after reportedly kicking a different police officer in the face at the hospital, News 12 reported. He faces up to 30 years in prison if convicted on the top charge.

Nunez was ordered held without bail during his Wednesday court appearance.