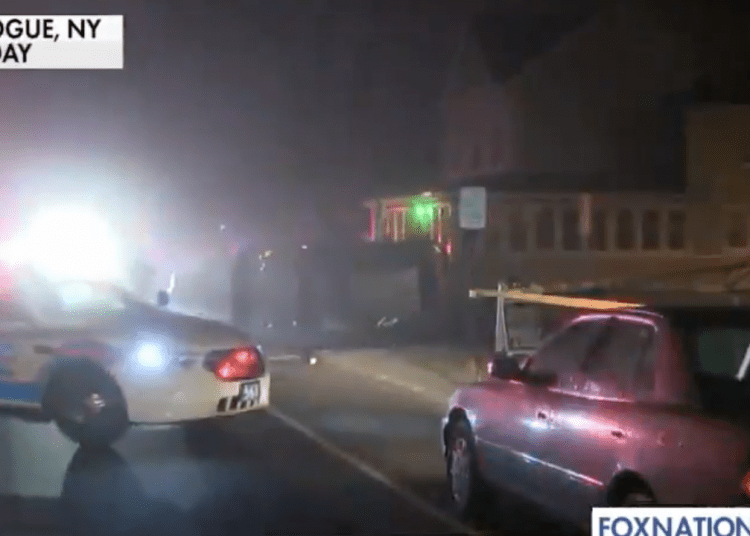 NEW YORK — Guillermo Sandoval, a U.S. Marine Corps veteran, explained on “Fox & Friends” on Monday how his training helped save a Long Island, New York, officer who was stabbed following a crash involving the suspect.

Sandoval has been credited with saving the Suffolk County police officer who was rushed to a local hospital in critical condition where, police said, he underwent emergency surgery.

Speaking on “Fox & Friends” on Monday, Sandoval explained what happened on Saturday night outside his home in Patchogue, which is located in Suffolk County, Long Island.

Sandoval, who was at home on Saturday night, said he heard a loud noise and went outside to find “a car turned on its side … a Nissan that had crashed into my front yard onto a tree.”

Prior to the crash, Officer Racioppo witnessed someone driving a Mercedes Benz erratically with no headlights and when he tried to pull over the vehicle, the driver slammed into the Nissan, according to Suffolk County Police.

Sandoval said when he went outside, he saw a man in the Nissan, who “seemed to be fine.”

“He gave hand signs that he was OK,” Sandoval continued.

He said he then “saw an officer trying to take down a suspect, who was the driver of that SUV.”

“The suspect acted as if he was going to give in, however, he used a curse word and basically ran to my backyard,” he continued.

At that point, Sandoval grabbed a flashlight and returned to his yard to see the “officer was unfortunately already down.”

Sandoval noted a “commotion going on in the corner of the backyard,” which he said was a struggle between the suspect and another man who had come to help. He later discovered that man is a retired NYPD officer, Fox News reported.

Sandoval said that because the retired officer also stopped to help, he was able to attend to the injured officer. During the tense situation, he acknowledged that his military training kicked in. He said he ran back into his house to retrieve a belt to use as a tourniquet for “deep gash wound” below the officer’s groin and was able to call 911.

“By the time I get down with the tourniquet and start trying to apply it, officers swooped in, they helped me, they put two more tourniquets on him, so altogether there was [sic] three,” Sandoval said, adding that he then helped officers carry Racioppo to an SUV to be rushed to the hospital.

We continue to pray for PO Racioppo's quick recovery. Thank you to 5th Pct PO Herbst and other responding officers for their quick actions which saved Officer Racioppo's life. Thank you as well to the two Good Samaritans who got involved.

On Monday, the Suffolk County PBA thanked all those who helped Officer Racioppo and tweeted, “We continue to pray for PO Racioppo’s quick recovery.”

“Thank you to 5th Pct [Precinct] PO [Police Officer] Herbst and other responding officers for their quick actions which saved Officer Racioppo’s life. Thank you as well to the two Good Samaritans who got involved.”

Sandoval also expressed appreciation for the (unnamed) retired officer who was there to assist.

“I’m just glad the officer is alive and God bless him and his family and also the ex-NYPD officer that helped,” Sandoval said. “I thank him and I thank God that he was there to help me with that as well.”

The SCPD family is asking for you to keep one of its own in your thoughts as he fights for his life following a stabbing in Patchogue.

Suffolk County Police said the suspect, Jonathan Nunez of Long Island, has been arrested after the “two good Samaritans” and responding officers took the 25-year-old into custody.

Nunez faces several charges, including aggravated assault on a police officer, DUI, and resisting arrest. Police said he was admitted to a Long Island hospital and will be arraigned at a later date, Fox reported.

The driver of the Nissan was transported to an area hospital for treatment of non-life-threatening injuries, according to police.