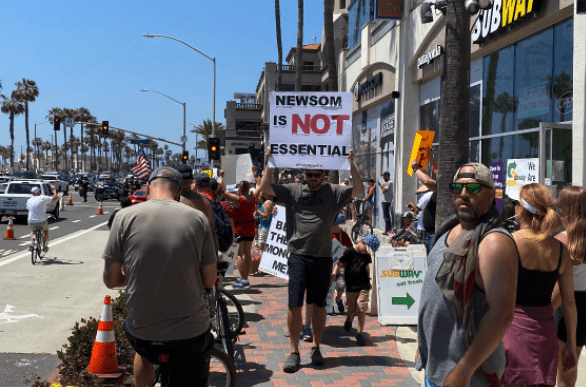 CALIFORNIA — Local governments and police departments in California have said in recent days that they will not enforce a mandate from Democratic Gov. Gavin Newsom that people in the state wear face masks in most public places, including outdoor areas where social distancing is not possible.

The pushback has occurred despite emphasis from the governor about the importance of following the order.

The order comes as California faces an increase in coronavirus hospitalizations as it opens up its economy.

Local politicians and law enforcement officials throughout the state are saying that they won’t use the force of law to ensure people wear the masks, with varying degrees of outright resistance to the governor, FOX News reported.

The resistance has come from at least one dozen municipal governments and police departments who’ve made public comments. This represents a significant principled divide between between state and local authorities on how to handle the health measures.

Mayor Reinette Senum of Nevada City (CA), for example, tore into Newsom in a Facebook post saying that “[o]ur Governor does NOT have the unilateral power to make such orders.”

Senum was perhaps the most adamant opponent of the mask order, generously using the caps lock button in her Saturday Facebook post.

“As you go about your day today, KNOW there is NO LAW that Orders you to Wear a Mask. Our Governor does NOT have that unilateral power to make such orders,” she said. “Ask our local Police chief or officers. They will not, and cannot, cite ANYBODY for not wearing a mask because the law does not exist.”

She added: “When you come across Newsom’s ‘orders’ online, you will see it’s linked to a page that does not lead you to his Executive Order, BUT to the California Department of Public Health GUIDELINES!”

The Sacramento County Sheriff’s Office will not enforce the mandate, but recommends that people wear face masks and would work in “an educational capacity” to encourage mask-wearing.

Outside of those two locales, officials with at least 10 other California governments said they would not be enforcing the face mask requirement.

A police source in Alameda County told Law Officer that two Health and Safety Code sections were initially used for violators of the Governor’s orders, but the alleged violations were rejected by the district attorney’s office since the section was not enforceable. Officers were then provided a Government Code section to use, but the leaders at their department were split on whether the statute was applicable to the alleged violation.

Essentially, they’ve been told to avoid enforcement of the governor’s orders unless another violation is paramount.

Moreover, several police officers serving at local agencies in Orange County have told Law Officer that their respective departments will not enforce the governor’s orders.

Placer County Sheriff’s Office spokeswoman Angela Musallam, according to the Sacramento Bee, said that though they hope people follow the rule, “we have no interest in arresting or penalizing people who aren’t wearing masks in any way.”

The Placerville Police Department shared the state’s guidance but emphasized that it does not wish to be involved in enforcing it.

“Please do not call dispatch to report others not wearing masks,” it said in a Facebook post. “This is not a police issue.”

The Roseville Police Department released a similar statement, which said private businesses could require people to wear masks inside but that it would focus on “education and compliance” and that it would defer to other governmental agencies for mask complaints.

So did the Visalia Police Department, according to the Visalia Times Delta, and Tulare County Sheriff Mike Bordeaux, who said “our enforcement efforts will only include encouraging compliance.”

Senum is correct that the mask mandate is part of a guideline and not an executive order. But, as pointed out by the Sacramento Bee, Newsom’s executive orders on the coronavirus pandemic mandate that citizens follow the state’s guidelines, essentially making them part of the orders.

Newsom made as much clear in a Friday tweet.

REMINDER: CA, you are now REQUIRED to wear a mask in public spaces.

We’re seeing too many people with faces uncovered. Wearing a face covering is critical for keeping people safe and healthy, keeping businesses open and getting people back to work.

Do your part. Wear your mask.

“REMINDER: CA, you are now REQUIRED to wear a mask in public spaces,” the governor said. “We’re seeing too many people with faces uncovered. Wearing a face covering is critical for keeping people safe and healthy, keeping businesses open and getting people back to work. Do your part. Wear your mask.”

But the executive orders and guidelines come with unclear enforcement mechanisms, especially for such minor offenses.

That’s part of the justification the Sacramento County Sherriff’s Office used when announcing it would not enforce the mask rule.

“[D]ue to the minor nature of the offense, the potential for negative outcomes during enforcement encounters, and anticipating the various ways in which the order may be violated, it would be inappropriate for deputies to criminally enforce the Governor’s mandate,” the sheriff’s office said in a news release. “Accordingly, the Sheriff’s Office will not be doing so. Rather, we will continue to operate in an educational capacity in partnership with the County Health Office.”

Amid the rush of local officials saying they will not comply with the mask order, Newsom participated in a public service announcement with a number of former California governors, including Republican Arnold Schwarzenegger, encouraging people to wear masks, FOX reported.

Help slow the spread of #COVID19.

“Hey, maybe you didn’t vote for me,” Schwarzenegger says.

“Arnold, news flash. I voted for Gray Davis,” replies Gray Davis, who Schwarzenegger beat in an election to assume the governor’s office.

“But no matter who you voted for, or if you didn’t vote at all, it doesn’t change that Californians look out for each other,” chimes in Newsom. “Don’t let COVID win. Wear a mask… Just do it.”

The effort to encourage compliance with the mask order comes as Newsom’s order has come under sharp criticism from people embracing liberty and freedom.

“[Newsom] does not have the authority to do this,” tweeted John Dennis, the Republican who got the most votes in the primary against House Speaker Nancy Pelosi, D-Calif., who now faces a Democratic general election opponent. “You may wish to cede him authoritarian power. I do not and will not.”

Joshua Scott, the Republican running to unseat California Democratic Rep. Grace Napolitano, replied to Newson’s tweet announcing the order with a gif of Randy Jackson of American Idol saying “yeah, that’s gonna be a no from me, dawg.”

I particularly look forward to Gavin Newsom attempting to enforce mask-wearing on my four-year-old son. Good luck with that. https://t.co/0MxLovU6vQ

And Ben Shapiro, the popular right-leaning podcaster and founder of the conservative website Daily Wire, implied that enforcing the specific provisions of the detailed ban would not be feasible.

In addition to mandating that everyone older than 2 years old wear the masks, California’s guidance requires mask-wearing by all people working somewhere public, walking in common areas, while riding any public transportation and while “inside of, or in line to enter, any indoor public space.”

“I particularly look forward to Gavin Newsom attempting to enforce mask-wearing on my 4-year-old son,” Shapiro said. “Good luck with that.”